Do you know what we haven’t spoken about in over twenty minutes? That’s right, Brexit. But beyond the backstops and back-stabbings, the political yo-yo-ing and the perilous game of deal or no deal playing out in real-life; what is the impact of our EU divorce on our mental health?

Ever since the referendum in 2016, our news cycle has been dominated by Brexit negotiations, updates from Brussels, myriad morsels of information that may or may not be true regarding our post-Brexit future. Will we run out of French cheese? Will we face roaming charges? Should we start stockpiling goods, like we’re facing a Continental Apocalypse? For the love of God, someone grab all the Whispering Angel!

“I’m stocking up on stuff now,” a friend informed me, citing sanitary products and baked beans among her doomsday collection, before another friend informed her that the latter was undoubtedly “the most British thing you could stock up on” and therefore unlikely to be affected by our European departure.

But what really will be? The fact is, we’re still not sure, and that uncertainty is directly fuelling something many are calling ‘Brexit Anxiety.’

“Whatever your views on Brexit, times of change and uncertainty can be unsettling – and this can have a big impact on young people’s mental health,” says Dr Marc Bush, director of policy at mental health organisation, Young Minds. “Thanks to the internet and social media, young people today have more access than ever before to news, opinions and debate. While this is a positive thing, it can also mean that young people are bombarded with bad news stories, anger, polarised views and warnings about the future. This can exacerbate anxiety, particularly for those already struggling with their mental health.” 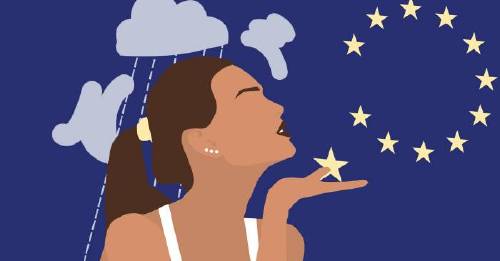 This lack of clarity on what Brexit means is not the only mitigating factor in our heightened anxiety. The instability of the government is not helping matters. With the squabbling, no confidence votes and in-fighting, not to mention the conveniently rapid exodus of Leave and Remain’s main players (who skipped out of the Brexit house party just when it was time to clean up all the empty bottles), it can often feel like Britain is in a car heading over a cliff- and no one knows who is driving.

“When we face any challenge we want to see unity – whether that be within a family, a community, or a government,” says anxiety specialist Mike Ward of the London Anxiety clinic, “When we see unity we feel safe and contained. Unity gives you safety and without it, you have a sense of chaos. That’s what is happening with Brexit”

Instead of trusting our representatives in Westminster to serve our best interests, we are questioning their every move – keenly aware that they appear no wiser than we are about the true consequences of Brexit. It’s like that moment you realise your parents are real, fallible people. It’s terrifying.

“There has been a real increase in clients talking about Brexit in the therapy room,” says Mike, who also observes that this is particularly the case for young people.

Of course our generation will feel the effects of Brexit the hardest. After all, we’re the over-sensitive types who even made the term ‘anxiety’ a buzzword in today’s pop-culture, think-piece lexicon. Yet there is a very real reason that millennials and Gen Z are feeling the burn of Brexit – most of us didn’t vote for it. Some of us were not old enough to vote at all.

Studies show that, on balance, most over 45s voted to leave and most under 45s voted to remain. Just over 70% of 18-24 year-olds voted for Remain and, were we to have a second referendum, 82% say they would vote to stay in the EU. That number now includes the millions of young voters who were not of voting age when the referendum occurred and yet they, like their older millennial and Gen Z cohort, have to suffer the impact of Brexit regardless.

“The overwhelming majority of young people, in every poll, want a least a public vote on Brexit,” says Amanda Cetwynd-Cowieson, who heads up For Our Futures Sake, the youth wing of The People’s Vote Campaign.

She speaks to countless young people every day who express their concerns about an unknown political outcome they did not ask for. They are just some of the many young people surveyed by the Young Women’s Trust recently; 42% of whom said the main cause of their angst is Brexit.

This is undoubtedly due to the fact that millennials and Gen Z already feel monumentally anxious anyway. For good reason. We are the first generation to be worse off than the last, we are facing sky-rocketing rents in a housing market that makes home ownership appear less achievable than space travel and job and financial insecurity in bleak economic times, in a political landscape in which the most powerful men are Putin and Trump. Oh yeah, and climate change, don’t forget that.

We don’t feel future-proof, and now our future seems as though it’s out of our hands, being perhaps irreversibly damaged once again, and, contentiously, by the generation who unwittingly screwed us over before. Hi there Baby Boomers, how’s it going?

All this does not make for happy cross-generational unity in our green and pleasant land, nor even within our own families, which is another direct anxiety exacerbator. Parents and children are finding themselves at opposing ends of the political spectrum. At best this is a spirited debate at the Christmas dinner table, at worst it can mean severe and polarising disagreements, often threatening to fracture families, many of whom now live under one roof again thanks to – oh yes- that housing crisis we mentioned.

“Brexit is an off-limits conversation at my house,” says Annabel Mannering, 31; “It genuinely creates massive hostility between me and my parents and I worry about the outcome of these arguments if I dare to bring up the subject.”

Boomerang children or politically diametric households are, of course, not the worst affected by Brexit. Those suffering from chronic medical conditions that require consistent medication are right to be concerned about the unchartered medical waters we may be in after leaving the EU.

Becky Lewis, 29, is diabetic and her life-saving insulin is manufactured abroad. She is currently stockpiling it – utterly unsure of what leaving the EU could mean for her medication; “I literally feel like Brexit may kill me” she says.
Other parties unsettled by Brexit and its uncertainty are, naturally, EU nationals and other nationalities currently living in Britain.

“I am still not really sure what my status here will be post-Brexit” says Charlotte Hawkins, 27, who is American, but lives with her European husband in London, “All the information we have received is unclear.”

It’s this fear and lack of clarity that Amanda Chetwynd-Cowieson, sees spread across so many young people.

“One of the main concerns is that people want their friend or partner or colleague whose ability to stay in this country is threatened by Brexit, to have some clarity on what is going on and what Brexit really will mean for them,” she says “Young people are starting to see the very real and life changing impact that Brexit will have on some of their best friends and it is really quite upsetting for a lot of people.”

Beyond the fear of losing friends, the atmosphere stoked up by Brexit; a ‘them and us’ mindset that feels palpable, is most unsettling for our generations.

“We are the people who have grown up in colleges and schools that are far more diverse than those of our parents. We have met people who don’t look or sound or act like us, but we are actually embracing that and we want to live in a more tolerant and equal society,” says Amanda, who fears the government are not sufficiently addressing this concern, “It is so hard to align what young people want and what they are saying, with the actions of the government right now.”

Alienation from our government, fear of losing friends, financial security, medication and perhaps even parents; it’s little wonder Brexit is taking a sledgehammer to our mental health. So what, if anything, can we do? After all, we can’t go to Brussels ourselves and fix the mess.

“What you have to do is focus on the things we do have control over- the knowns not the unknowns,” says Mike Ward, “This can be small stuff like exercise or loved ones – anything that gives you a sense of unity, safety and connection.”

Dr Marc Bush warns that tolerance is also vital in minimising our anxiety. “Whether you’re for or against Brexit, it’s okay to have strong opinions about politics and about decisions that are being made about your future,” he says, “But, for the sake of your own mental health, it’s helpful to try to understand the positions of people with opposing views, and to treat others in the way that you would wish to be treated yourself.”

Both advise seeking medical help should you feel seriously affected.

Brexit, it turns out, is a bit like caffeine or any other stimulant that, when it hits the body, can cause anxiety to flourish. In an already anxious body like our generation, it could be like mainlining espressos. So, do yourself a favour; ease up on the news, practice some self-care, change the dinner table conversation and, should you really need to: get whatever help you need.

It’s about time we saw our unedited photos in a different light, here’s how…