Chanel always provides the biggest wow moment to round off fashion month. Closing Paris Fashion Week on the final day of shows, the clothes (shoes, bags, jewellery, belts AND hats) are what dreams are made of; the models beyond stunning and the production is always spectacular.

Whether that’s turning the Grand Palais into a supermarket, ice cave or launching a rocket, Karl Lagerfeld – the house’s late Creative Director – always turned the Chanel catwalk into an epic instagrammable moment.

And today the global fashion pack gathered with bated breath to see the collection that would be Karl’s last for the house, following his death on February 19th aged 85, after 36 years in his role as Creative Director at Chanel, a job he was contracted to do until his death.

Our invitations came illustrated with the iconic double C logo made from ice crystals and the hashtag ChanelInTheSnow. Guests were advised to wear flat shoes. We heard that there would be a minutes’s silence and some attendees mused that they felt they should wear black… But as we went through security checks and bag X-rays to enter the catwalk space – all normal for a high profile show in a landmark venue – it felt like signature Chanel. 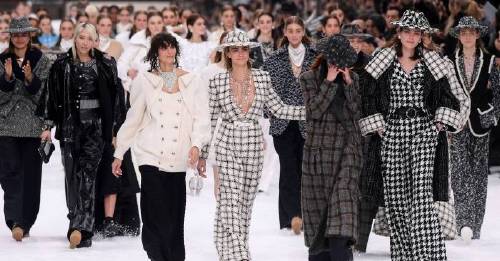 And this season we entered into a snow-covered alpine scene. There were Christmas trees, life-size chalets with ‘smoking’ chimneys and a tinkling soundtrack. Karl, who once said “I get inspired when I’m working, it’s my engine,” would have had a huge part in the concept of this collection and worked closely with Virginie Viard, who has been named his successor.

Before the first look was revealed there <was> a minutes silence before a recording of Karl was a played, where he described his work as “like walking in a painting.” A poignant reminder of the ability he had to make cloth – essentially an inanimate object – into a piece of clothing that could be desired and make you dream. And then, the show: Cara Delevingne was the first model out in a slouchy checked tweed trouser suit, monochrome check oversized coat and jaunty wide-brimmed hat.

What followed was a typically Chanel array of elegant black and white outwear (this was Autumn / Winter, remember); a section of Eighties-toned tweed suits in shocking pink and turquoise; a tri-striped puffer jacket which will surely become a pop star fave; cosy sheepskin snow boots and sweet white dresses with chiffon embellishment, one of which was worn by Penelope Cruz, who took a turn as a model for the morning.

The 10 things we’ll *all* be wearing next season

At the very end, every model walked the catwalk – some visibly tearful – while Cara led the march, clapping on her way. And then we waited… usually Karl would appear at the end or walk the catwalk, waving at his friends and fans but instead… there was nothing.

The audience dispersed onto the catwalk to pose next to the chalets and take selfies with the handsome puffer-jacketed ushers. The pictures will be our memories, until the collection arrives in store in September and then we will buy a memento of the end of the era-defining Karl Lagerfeld’s reign at Chanel.