Storming the Grammys red carpet back in February 2000 wearing slithers of the palm-print chiffon, J.Lo’s look quickly became the most searched for term Google had ever seen. Only offering text results, this very moment was the reason Google Images was born (…we’re not kidding).
It was one of the most significant fashion moments of the new millennium, but no one could have predicted how much of an impact Jennifer Lopez in a barely-there green dress would still be having two decades on.

Fast forward 20 years, and J-Lo made a surprise appearance at the Italian fashion house’s Spring/Summer 2020 show – which hosted a collection largely based on the ‘jungle’ print – wearing an even more scantily-clad take on the look. Thrilling the fashion week frow who were three quarters of the way through their mammoth month of global shows, she sashayed down the catwalk in a way only J.Lo knows how. 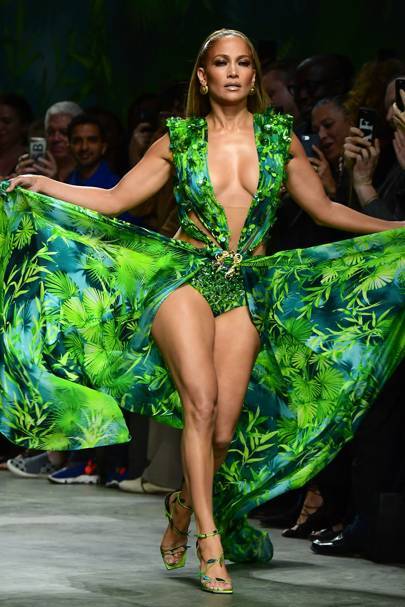 The moment became such a viral success that, according to Launchmetrics, it resulted in $9.4 million worth of media mentions and online engagement. To put that in perspective, this single moment culminated in a quarter of London Fashion Week in its entirety, which garnered $36 million.

Just a couple of months on from that mammoth moment and the collection is about to drop in stores. But despite all the hype, there was a question as to whether anyone would *actually* wear the looks.

Perhaps unsurprisingly, the J.Lo dress is already one of the most-wanted pieces from the SS20 collection. 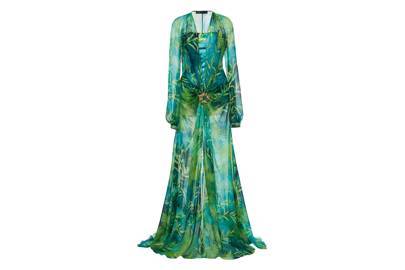 Net-A-Porter is experiencing unprecedented interest from their EIP (extremely important people) customer list for both the embellished runway version – which will retail for £6,960 – and a more commercial version with sleeves – a relative steal at £4,850 – according to the Telegraph.

What To Wear When You’re Expecting: Rebecca Minkoff’s Tips For Maternity Dressing

“As soon as Jennifer Lopez hit the runway wearing that epic dress, myself and the team had texts arriving [from VIP customers who wanted to pre-order it]” Ida Petersson, womenswear buying director at BrownsFashion.com, revealed.

“That’s the power of Instagram. The waiting list for this dress is insane, we now have four times as many people down on the list as we bought stock for.”

“It’s a [almost] £7,000 dress, so it’s rare to see this sort of response. Demand is normally limited to a smaller customer base when we’re talking about something at this price point.”

E-tauler Moda Operandi has had the dress available to pre-order for weeks, while Harrods is all set for a major window display to celebrate its launch on February 15th.

You get the gist, it’s going to be major. Worth dropping a few £K on the, surely? Better get saving…

Our Favorite Fashion Looks From The 2020 Grammys Red Carpet

We’re barely halfway through awards season, but this racy 90s trend is already all over the red carpet