We know – it’s hard to imagine your GP handing out MDMA, or collecting LSD from your pharmacist. But if recent research is anything to go by, this could be the direction we’re heading.

Medicinal cannabis oil was made legal solely for prescription in the UK last year, while a study is now underway into the effects of MDMA on sufferers of post-traumatic stress disorder.

Psychedelics: they’ve been a staple of the party scene for years, the stereotypical drug of choice for all-night ravers and 1960s rock stars. But what about being prescribed them by your doctor for anxiety, stress or depression?

It’s a mind-blowing step forward, especially considering – wellness buzz aside – these drugs remain very illegal. Possession of the strongest of these substances can land you up to seven years in prison. They include LSD, magic mushrooms, DMT (dimethyltryptamine), and potent plants such as the cactus San Pedro and the vine ayahuasca – used in spiritual ceremonies. The latter has also become a lure for aspirational types searching for ‘enlightenment’ in their downtime, despite the dangers associated with it.

For those not willing to risk getting caught in this country, the luxe Psychedelic Experience Retreat in Amsterdam (where some psychedelics are legal) offers yoga, organic food and yes, magic mushrooms, all for up to £1,200 a visit. How did a psychedelic drug get its own spa? It’s thanks to psilocybin, the mind-altering part of magic mushrooms, which the body converts to psilocin – producing the same effect as LSD. 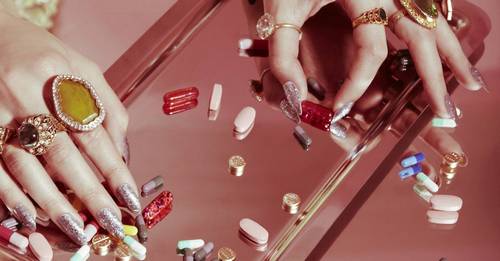 “Psilocybin seems to work like a ‘reset switch’ for the bit of our brain that tends to overthink things,” says Dr James Rucker, who is currently leading King’s College London’s research programme into psychedelics for treating depression. “Our participants have described taking psilocybin as like being in a ‘waking dream’, where new perspectives emerge. Interestingly, these experiences tend to correlate with enduring positive changes in mental health.”

This explains why some people are travelling thousands of miles to take psilocybin in a therapeutic setting. Lucinda, 33, began using it a few years ago to help her severe anxiety, brought on by her stressful law job. Her tightly wound stress meant that even “a commuter pushing onto the train in front of me would have triggered anger”. She tried everything to treat her anxiety, from not drinking alcohol to cognitive behavioural therapy (she was wary of taking antidepressants). Although Lucinda admits to being “judgemental” about hallucinogens in the past, she’d reached a point where she needed to “gain some perspective”. This is where the Psychedelic Experience Retreat in Amsterdam came in.

The retreat is run by British company The Psychedelic Society, and director of experience Stefana Bosse says the weekend has been a sell-out since it launched for those in the know three years ago – with its first women-only weekends starting this year.

“These psychedelic experiences blast me wide open, emotionally,” says Lucinda. Over four months and at a cost of around £4,000, she’s experienced six “plant medicine ceremonies”, one with psilocybin at The Psychedelic Society, and five ayahuasca journeys over a week at a retreat in Costa Rica. She now ‘trips’ every year or two, treating it like a maintenance top-up and mental health holiday: “They’ve been a powerful tool in managing my stress and anxiety.”

While there’s no denying the appeal of stepping ‘outside yourself’ to escape depressive spells, intense stress or work anxieties, is it really worth the risk? As despite their popularity, psychedelics still come with a serious warning label. Hidden, unresolved psychological trauma can come to the forefront during a trip and directly impact the safety of the experience, which could last anything up to 12 hours.

“The danger with psychedelics comes from risky behaviour when on the drug – and not having the facilities to contain that behaviour if it occurs,” says Dr Rucker. “A bad trip can be when you encounter an unresolved traumatic experience. It’s difficult and unpleasant, and – without the right support – reaction to a bad trip can be very dangerous.” Unfortunately, Kim, 28, discovered this when she travelled to Peru two years ago. She’d been seeing a therapist for three years, but felt it wasn’t working for her. She’d heard from friends, who’d taken it, about the mental-health benefits of the hallucinogenic drug ayahuasca and admits she was so desperate to try it, that she was “woefully unprepared”.

“I went for a cheap retreat and the shaman didn’t take care of us,” she says. “I remember going deeper into blackness and I didn’t know how to come back up.” Not only was her trip poorly supervised, Kim herself was perhaps unaware of the long-lasting potency of these drugs. When she returned to the UK, she started experiencing severe panic attacks and ended up spending a further year in therapy.

Still, negative experiences like Kim’s haven’t stopped medical bods trying to get the legal status of psychedelics changed. In the UK, all psychoactive substances are treated as Class-A drugs, but last year’s change in the law to support medicinal cannabis oil has prompted The Psychedelic Society to lobby for psychedelics to switch from being a schedule 1 (dangerous drugs with no accepted medical use) to a schedule 2 drug. This status change would make some of them a controlled – but available – drug, meaning that it could one day be prescribed by doctors and pharmacists. To do this, the therapeutic properties of psychedelics have to be proven.

Some studies around the world are going as far as labelling psychedelics a medical breakthrough; suggesting they help to reset key brain circuits that are known to play a role in depression. That’s what a team from Imperial College London and the Beckley Foundation (which researches the therapeutic properties of cannabis and psychedelics) discovered when they released the world’s first MRI images of the human brain on LSD three years ago. “Areas of the brain started sending and receiving information to regions they usually don’t talk to,” says Amanda Feilding, founder of the Beckley Foundation. “It positively altered networks that hold on to destructive patterns of behaviour – like addiction and depression.”

As for that previously mentioned MDMA trial, the US Multidisciplinary Association For Psychedelic Studies (MAPS) is trialling the drug as a treatment for members of the military and others with PTSD – and combined with psychotherapy, it’s proving to be successful for many patients who don’t respond to antidepressants. How? The drug floods the brain with hormones and neurotransmitters that create hope and feel-good emotions in users. The ‘rave’ culture associated with MDMA is actually why California-based clinical psychologist Dr Alicia Danforth is investigating small doses of the drug as a therapy to help autistic adults deal with social anxiety.

In light of these types of science-backed trials, the lure of curing problems with a ‘joyful’ trip is hard to ignore. Melissa, 39, had never taken drugs before, yet jumped at the chance to take part in a UK-based magic mushroom medical trial at London’s Hammersmith hospital in 2015, after suffering crippling depression for 18 years. “I couldn’t work. I couldn’t go out. I couldn’t sleep,” she says.

“When I first took the psilocybin pill, I saw lots of mad graphics – dragons and undulating shapes – it was just crazy. Then, suddenly, I left my body. I was this orb of light bouncing through rainforests and waterfalls – I was everywhere. It was as if I was bigger than the problems I was facing.” After the six-hour session, Melissa felt, “at peace for the first time in years”. Today, she’s still on anti-anxiety medication, but no longer on antidepressants, crediting the magic mushrooms for this seismic change: “It transported me away from all the issues that were controlling my life.”

The psychedelic therapy that Melissa experienced, whether in the context of a hospital room or in a shamanic ritual, is still very different from taking mushrooms at a house party – and there are deadly risks involved with picking your own in the wild. People like Melissa are prepped before their trip and drug doses are closely monitored, as is the environment where ‘trip sitters’ keep a close watch. That’s why the team at Stefana’s Amsterdam retreat are trained at drug welfare bodies, and guests are vetted – anyone with a family history of schizophrenia isn’t accepted, as psychedelics can induce severe psychosis in those susceptible to it. They also need to be completely off antidepressants before taking part in any therapeutic trial or retreat, as they interfere with the process.

It’s also by no means a guaranteed fix. You may just be one of those for whom psychedelics have no effect. For example, a recent study into the anxiety of terminally ill patients found that although a third were positively affected by taking substances, another third showed no improvement at all.

That said, whether it’s visiting a shaman in Peru or taking mushrooms at a retreat in Amsterdam – psychedelics are on the agenda. US psychiatrist and author Dr Julie Holland, who’s written extensively about her experiences working in psychiatric emergency rooms, believes we’re at a “watershed moment in psychiatry”, catalysed by the growing number of people suffering from psychological conditions. “I believe that desperate times call for desperate measures and these are daring times in medical advancements,” she says.
These ‘daring times’ may set us on a path towards medically sanctioned treatments, meaning this could be the future of mental-health healing. However, it still remains an illegal activity packed with risk – there’s a long way to go before we’ll be picking up regulated psychedelics prescriptions and we’re certainly not there yet.

Psychedelics: what you need to know

Make sure you are somewhere safe, with a trusted, trained professional who can help if necessary. Psychedelics are not an ‘easy way out’ of mental health issues. They can induce disturbing experiences in some people. If you have a history, or a strong family history, of psychosis, schizophrenia or bipolar disorder then do not consider using them.