According to Amy Bird, an Evolutionary Astrologer, “Uranus goes retrograde every 7 months or so and so it is very much part of its natural cycle. It creates an illusion of going backwards, travelling back over the ground it has covered for the past few months, since April.”

“The energy of a retrograde planet tends to be less predictable, more erratic, more internal and possibly more destructive than when it is going forward. Uranus is already a very unpredictable planet, so its capacity to change, shock, surprise and upset the apple cart could be greatly heightened during this retrograde cycle.”

If you thought Mercury in retrograde was bad news, just wait till you hear about Uranus. (Side note: is the word ‘Uranus’ ever not going to be funny?) The planet of rebellion has been in retrograde since 19 August 2021, and will continue to track backwards for five months, till 18 January 2022.

However, Amy points out that as Uranus moves backwards, we are also “given the opportunity to look back, step back and be more objective, so that we can hopefully see things from a clearer perspective.” 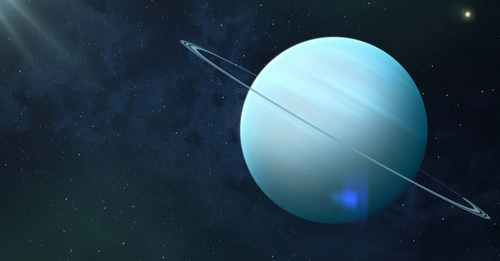 Here’s everything you need to know about Uranus in retrograde, including how it may affect your star sign:

What is Uranus the planet of?

According to Amy, “Uranus is the ruling planet of Aquarius and is known as the Great Awakener. Before Uranus was first sighted it was thought that Saturn was the last planet in the solar system – a neat and tidy closed seven planet system that made sense.”

When Uranus was discovered, Amy explains, “It sent shock waves through the astrological world and shook up the whole system! And this is what Uranus does, it shocks, surprises, electrifies, creates waves, wakes us up, forces us to think outside of the box, and helps us to see things from a different perspective.”

How can we expect Uranus in retrograde to impact our lives?

Amy identifies that Uranus is the planet of freedom, saying that it “forces us to look at things differently and make any changes that are necessary to live a more authentic life.”

Now is the time to question whether we’re actually living an authentic life, or are we simply blindly accepting the rules?
Amy asks, “Are we truly free, or is there anything that we need to liberate ourselves from? … Uranus asks us to break the rules, to step out of the mould, to stand up for what is right even if it makes us unpopular or threatens our security.”

How will Uranus in retrograde affect each star sign?

Aries is the pioneer, the courageous warrior and instigator of new beginnings, so Uranus energy isn’t too daunting for this brave, fiery, independent sign. Aries doesn’t much like being told what to do, so you may find that you tend to question authority more during this time. One thing to watch out for is making impulsive decisions, especially around finances. Look before you leap!

Uranus is in your sign right now, so you are being asked to change, whether you like it or not! It will help if you are able to be flexible and not dig your heels in too much. You have the opportunity to break down some of your more unhealthy patterns and find a greater sense of freedom, but it may also feel a bit unsettling at times as Uranus threatens your innate need for security. There is a fine line between scary and exciting, but no matter what, this could be a very liberating time for you.

Gemini is a very curious, adaptable and versatile sign that thrives on doing things differently, so you may take great delight in all the innovations and changes that retrograde Uranus brings. Nobody is immune to the unsettling nature of Uranus in Taurus, however, so it is important to stay as grounded as possible so that you are not too much in the head, which can cause tension.

Cancer likes to feel safe and loves all that is familiar, so Uranus Retrograde could feel quite unsettling and even scary at times, as it threatens your sense of security. However, this could also be a time when you are forced out of your comfort zone, which is always a good thing! As Uranus brings the necessary changes you may be forced to be a bit creative and to step up and take responsibility for yourself and those you love.

The Uranus energy could stimulate your creativity and may also bring about some kind of revolution in your sense of purpose. You may need to attend to the practical side of life, however, as much as you might prefer to simply follow your joy! You may receive the odd shock or two, as you are forced to bend and be a bit more flexible than you might usually be. It is possible that you could unearth some skill or talents that you didn’t know you had, but may also find that your sense of self-worth has a bit of a wobble.

This could be a very helpful time for you in terms of breaking up some of your more rigid routines and introducing some fresh air into your life. While you may prefer for things to be in order, the erratic energy of Uranus could liven things up and make your life less predictable, which is a good thing. You are able to adapt and grow and are always willing to improve yourself, so the changes that come during this time could bring about a new perspective that is very beneficial for you.

Libra is a sign that seeks peace, balance and harmony and prefers not to rock the boat, so this Uranus energy could feel a bit unsettling. Uranus calls for us to liberate ourselves and question the rules, which could be somewhat out of your comfort zone, as you have a tendency to see both sides of an argument and prefer to keep the peace. You might be called to free yourself from any tendencies towards people-pleasing as Uranus prompts you to be utterly true to yourself and more authentic, even if it is a bit uncomfortable!

Uranus is in your opposing sign right now, so this could be a highly transforming time for you and your relationships. You may find it easier to be utterly yourself, without apology, although you could experience some shocks or surprises within your relationships, as people could act slightly out of character. You like to dig deep below the surface to find the truth, so the revolutionary authenticity of Uranus could very much agree with you, as secrets are revealed and shocking revelations come to the light. It is important for you to be as flexible as possible, as some things are simply beyond your control!

Sagittarius is such an adventurous, forward looking, freedom loving sign that it is unlikely that you will be phased by Uranus Retrograde. You always seek to change and grow and so Uranus can help you to find the sense of freedom and expansion that you may be craving. No-one is impervious to the unsettling nature of Uranus in Taurus, however, so it is important for you to keep an eye on the more practical side of life as well as looking for the next adventure!

Capricorn is a sign that prefers to maintain a sense of control and tends to respect authority and follow the rules. The revolutionary energy of Uranus could rattle your cage somewhat, but could also help you to initiate any changes that you may have been resisting. You could benefit from loosening your grip and letting some of your walls down, as Uranus encourages you to bend some of your own rules and be a bit more flexible.

Uranus is the ruler of Aquarius, a sign that is naturally rebellious, wilful and can definitely think outside the box! You may feel some quite strong urges to bust out and find a greater sense of freedom. You may find yourself feeling a bit more erratic than usual, and could experience some sudden insights and flashes of brilliance, as you come up with inventive ideas for the future. You are being forced to make some significant changes to the way you operate as Uranus challenges you to step into your true, authentic self and create the future you know is possible.

Pisces is a very sensitive, compassionate sign that tends to go with the flow, while Uranus could possibly force you to stand your ground and stand up for what you believe. However, you are able to cope with the change and upheaval that retrograde Uranus could bring, as long as you have somewhere to retreat to in order to find your centre. Pisces is very adept at shape shifting and becoming whatever is needed for the situation, and this could be very useful as the ground shifts and shakes underneath us.

What on earth is trading, and can I do it myself?

Black women with cancer are treated differently to white women