Keys sits in front of the camera for the two-and-a-half-minute clips, starting with, “The other day, I went to the nail salon with Genesis. He’s in the chair, and he’s like, ‘I want rainbow.'”

The manicurist was happy to comply, bringing out lots of nail polish colours for Genesis to choose from and painting each nail a different shade. But then he had second thoughts. “After he painted his nails, he looked at me and said, ‘Mommy, I don’t want this on my nails.’ And I was like, ‘Why? You were so sure.'”

There are a few precious years of childhood where we go through life blissfully unaware that others may be judging what we do, how we look, and the ways we choose to express ourselves. And Alicia Keys thought that, at four years old, her son, Genesis, still felt unburdened by the possibility of scrutiny. However, during a recent trip to the nail salon, she was heartbroken to learn otherwise – and she shared her thoughts on the experience with her 17 million Instagram followers.

That when’s Genesis said something that shocked Keys. “He was like, ‘People are not going to like it,'” she says. “Can you believe this? Four years old – he’s four, and he already understands the concept that someone’s going to judge him because he chose rainbow colours on his nails.” 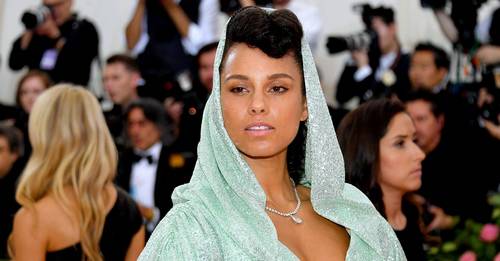 Keys encouraged Genesis to stick with the rainbow manicure. “I told him, ‘Why? Nobody’s gonna judge you. They’re gonna like it. It’s so cool. Like, look how creative you are. Look how amazing. You had this idea. Stick with it. You chose it, you liked it, you do it. Who cares what anybody else says?'” she says, adding that she said one more thing to persuade him: “‘You know, a lot of guys paint their nails. This is not like some strange thing that you only do.” And she says that made him feel better about it, but it also got her thinking about how people – even her own four-year-old child – are worried about being judged over gender expression.

“The way I see it is that there is masculine and there’s feminine energies inside of us all, you know?” she says. “And it gets concerning to me that we can’t just explore these different sides of ourselves, you know, these different energies that are within us.”

Keys admits that she’s experienced that kind of judgment firsthand, saying, “And even for me and myself, you know, I oftentimes express the masculine energy that’s inside of me, and it’s very natural to me. That’s how I feel. And all the time, if that happens, it’s the judgments.” She goes on to say that she wants her sons to feel free to express any feminine energies they may feel without fear of labels.

She leaves viewers with a hope for the way we all treat ourselves and others. “Why can’t we just express the different energies that are inside us?” she says. “You know, this is a very normal, ancient, powerful, spiritual understanding that we all have masculine and feminine energies, and we should be able to explore and express them however we want to.”

These simple nail art designs are perfect for an easy, at-home manicure