The mastermind behind Fleabag has teamed up with Domhnall Gleeson and Merritt Wever for brand new rom-com, Run. The eight-part series centres on an American woman named Ruby whose life is thrown up in the air when a past love interest re-emerges. As the ex-lovers make a plan to disappear together, they are faced with a series of messy consequences. 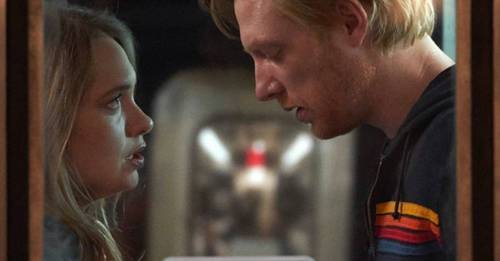 All herald the return of Phoebe Waller-Bridge!

Phoebe stars in the show as Flick, a role which has not yet been described. She is also serving as executive producer alongside her long-term writing partner Vicky Jones who co-wrote Killing Eve, Fleabag and Crashing.

The epic female talent doesn’t stop short there because Emmy-nominated Australian director Kate Dennis, who worked on The Handmaid’s Tale, has directed the pilot episode of the season. Put simply, the nation is in safe hands.

HBO have shared a teaser image from the series and it shows Merritt Wever and Domhnall Gleeson engaging in a very intense conversation on a train. What are they talking about? Where are they going? You’ll have to tune in to find out.

Run is the first of many exciting shows in the pipeline for Phoebe who recently signed an exclusive contract with Amazon Studios. Speaking of her future plans, the writer said: “I’m insanely excited to be continuing my relationship with Amazon. Working with the team on Fleabag was the creative partnership dreams are made of. It really feels like home. I can’t wait to get going!”

While our viewing schedules are set to be filled with Phoebe’s razor-sharp wit, she has unfortunately confirmed the news we’ve all been dreading: Fleabag won’t be returning for a third season. Speaking at the Golden Globes, she said: “I haven’t changed my mind about season three. It feels more and more about being the right decision. [Awards shows] are just beautiful goodbyes. But there’s been so many goodbyes every time.” Pass the Kleenex.

Run will air on Sky Comedy on 15th April and will be available on Now TV.

Psychologists Recommend We Parent in “Shifts”

Because the prequel ‘Midnight Sun’ is finally being released

Get to Know Todd Spiewak, Jim Parsons’s Other Half of Almost 20 Years