So when one of the world’s biggest makeup moguls decides they’re dropping a collection – everyone listens. Having only ever released cosmetics with two brands previously in his entire long-spanning career (ColorEvolution and MAC Viva Glam), the drag queen-cum-supermodel of the world’s third dip into the world of production is one a little closer to home.

Creating a 13-time-Emmy Award-winning TV show and a lifetime of proving to the world that *anyone* can slip into a dress, heels and break gender boundaries, it was only a matter of time before crowds were hungry for drag legend, RuPaul Charles, to inject a little bit of his world into ours.

Ru has teamed up with longtime friend and fellow beauty-queen, Mally Roncal, to launch the collaboration which has already taken QVC and the internet by storm, and consists of eight key pieces (with numerous shades within, of course) that he describes as “wardrobe essentials for people who love makeup, and these are all the colours that I use personally”.

“I wear makeup for almost 16 hours while working, so a lot of this was formulated with that in mind.” He says.

Aptly named “Mally x RuPaul”, the collection which has a *huge* range of shades for those of us who like darks, brights and everything in between, fuses the worlds of drag makeup and Hollywood glamour together.

“I’ve never met somebody who’s so intuitive with what real people as well as drag queens or celebrities need.” says Mally.

“The Mally Beauty customer tends to be drawn to longwear, bullet-proof, all-day fierce makeup, which is exactly what he needs anyway.”

Ru adds that working together was easy for them, as he’s always used friend of 20 years, Mally as inspiration for his own looks.

“Her approach to makeup is fun. Even if you watch her on TV, her joy of makeup and love of life is what inspires me. It’s the heartbeat of humanity, colours, laughter, sparkle, joy.

“I never think of makeup as a gender, but I just think of like when you’re a kid with crayons. I remember playing with the colours and you could put them wherever you want, you could put eyeshadow on your nose and it wouldn’t matter – I love it.”

Despite this being the first time the pair have worked together on something so huge, they both agree that it hasn’t changed their relationship – despite Mally taking some convincing that ‘Mighty Love’ (a deep berry shade of their lip liner) simply *had* to exist.

“Ru said he wanted a rust colour eyeliner but I wasn’t so sure because I’d never really used one, but when we presented this collection on air for the first time, the producer came in my ear and said ‘oh my god, there’s literally a vertical spike in sales because Ru is talking about this ‘Mighty Love’ colour…and then my girlfriends just text me saying I need 5 more!”

“There are things that surprise you when you try them…so, I apologise.”

“You should always work with the people that you love to be around.” Ru says.

“We’ve been lucky enough to have that, and I’m sure a lot of people don’t, but I won’t go to a job unless I’m going to have some fun and it’s people I love.”

Outside of their deep-embedded friendship (which is very clear from their body language that they’re obsessed with each other), Ru is already a known fan of Mally’s noteable makeup brand, Mally Beauty – and admits even though he could get it all for free, he would bulk-buy it to give out to everyone he knows – his favourite product being the best-selling Face Defender, which has also been rebranded and added to their collection as a token of his appreciation for it. If only we could.

According to Ru, the cream compact formula is an alternative to powdering your face, and adds a subtle sheen to your skin, while still keeping everything in place, and apparently “everyone in Hollywood has it.”

“You can say to any makeup person ‘do you guys have any Mally?’ and they’ve got it because it works so well.

“We don’t love translucent powder because it makes you look so much older – so this is a mattifier, making the pores disappear, making your wrinkles disappear, and giving a soft focus so you don’t even need powder – and she was gracious enough to put it on the collaboration.”

However, when asked about their favourite product they’d created together, the solid answer seemed to be that their “Drag Lash” mascara, with an innovative square-based brush, allowing users to get right to the root.

Mally says: “We really went in and said ‘what can we do that no one else has done? You can get the lift, the thickness and the formula is very intense and getting crazy, amazing reviews. Calling it drag lash was setting a hefty goal.”

Ok, we know what you’re thinking. So we know what RuPaul loves, but Mally has a history of working with major A-listers, including being the MUA of choice for the super-low-key pop sensation, Beyoncé Knowles.

So here’s where we ask: What would Beyoncé do?

Well, it turns out that she’s got a special package en route to her *right* now.

“Oh she would eat all of this up, are you kidding me?” Mally laughs. “She would love all of these colours and I think she’s going to love the liquid lipsticks.”

And for good reason, as Mally admits: “We were just at DragCon New York, I wore this liquid lipstick and for lack of a better term, made out with 400 drag queens over two weekends and it was still on – a game changer.”

Ru sums up the collection perfectly, adding “Really it’s fun, you go and have fun with it, and just celebrate the fact that you are alive, you have a beautiful body, and you want to paint it up and say thank you universe for this gift.”

And as for the future? There’s a lot of hints and jitters at the talk of more products being unveiled…

“We’re celebrating what’s here now, but we’ve had so much fun and the collection has been so successful that it’s the natural step to think about what we wanted to do next.”

G-Beauty is the next big thing in skincare because 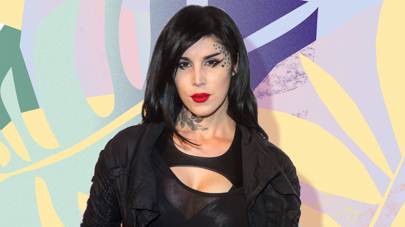 How Kat Von D transformed from a 14-year-old tattoo, artist into one of beauty’s power players