«I have constantly been having to prove to the world and UFC fans that you can be beautiful and a badass at the same time.» 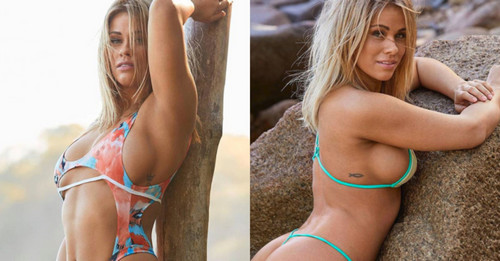 Paige VanZant is officially the first UFC fighter since Ronda Rousey to be featured in the Sports Illustrated Swimsuit Issue.

The photogenic brawler posted a trio of bikini pics from this year’s mag that were captured by photographer Walter Chin on a beautiful Puerto Vallarta beach.

In the first two, above, VanZant dons a cutout, multi-colored one-piece by Haus of PinkLemonaid as she leans against a weathered tree.

The third image shows off her powerful curves in a sea green bikini by TeenyB Bikini Couture.

«I was unbelievably shocked that SI Swimsuit called and asked if I would be apart of their magazine,» she told SI Swim.

«I have constantly been having to prove to the world and UFC fans that you can be beautiful and a badass at the same time. Well, now it’s my moment to shine.»

A behind-the-scenes video offers a glimpse into the full gallery on SI’s website.

«This is my way of not holding anything back,» she added. «I want people to know that you don’t have to choose.

«You do not have to label yourself as one thing because that’s what surrounds you. I’m not scared anymore to show how girly I am.»

As MMA Junkie notes, he 8-4 flyweight last competed at UFC Fight Night 143 in January, when she submitted Rachael Ostovich early in the second round.

Though the bout left her with a fractured arm that required her to step back from the sport temporarily, her passion for fighting hasn’t dwindled.

«Fighting for me was never a choice; it was never something I watched as a child or looked up to anyone doing,” VanZant said. “Fighting found me. It’s who I am. I walked into a gym one day and realized I was home.»

“My career took off right when I was 18. It’s a rush. It’s dedication – day in and day out, sacrificing and grinding for the most amazing feeling in the world, getting your hand raised after a hard-fought war.”

VanZant follows UFC champ-turned-WWE star Rousey as the second fighter in the organization’s history to be featured in the annual bikini-clad issue.

Celebrate her SI spread with some of her most stunning Instagram posts below:

Here’s Everything Coming and Going From Netflix in April