Covid-19 and the effects of the pandemic made 2020 feel like we were all stuck inside some terrifying post apocalyptic film. There was a real life killer virus sweeping the globe, lockdowns and food rationing.

If last year was a “Black Mirror” episode, this new year has felt like an Orwellian affair with the most powerful man in the world, the US President being cut off and silenced from Twitter, Instagram and Facebook.

Whilst we are unsure of how permanent President Trump’s ban will be, it does raise other interesting ethical questions, which has people on social media divided.
President Trump has been impeached for a second time, making him the only US President to have been in American History. But as much as we may celebrate not being exposed to his hateful and inflammatory rhetoric, does removing his voice pose a wider ethical challenge around free speech? Ateh Jewel is conflicted.. 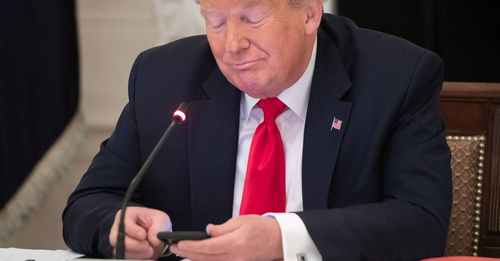 It’s fair to say I’m no fan of The Donald with his hateful dog whistling rhetoric, which has brought America to its knees, with huge political and racial divisions reopened. However, it was the storming of the American Senate by Trump supporters, which finally got Trump silenced from social media. The riot and violence, which erupted on Capitol hill, in an attempt to stop the democratic process and smooth transition of power to President Elect Joe Biden, was a shameful day for America. Biden declared it, “one of the darkest days for our history”. In stark contrast, Trump told the domestic terrorists, “we love you; you’re very special”.

Trump’s social media suspension does kick up issues of freedom of speech and cancel culture. I really don’t agree with cancel culture, shutting people down over a mistake and not allowing them to grow and change. I also think it’s dangerous to allow people’s toxic views to grow and fester behind closed doors. It’s much healthier to throw a light on them and have a respectful discussion. Trump came to power in 2016 in the first place as the disgruntled American white working class’ fears and concerns over immigration, loss of jobs and security had been dismissed as racist and irrelevant.

Whenever we cancel people or their concerns, the far right, fascists and chancers like Trump will only be too happy to twist their genuine concerns into something hateful. By shutting Trump down are we also not shutting down the chance to tussle and debate his often offensive views and rhetoric before it turns to even more damaging poison? Is silencing Trump a slippery slope to an infringement of all our freedom of speech liberties? The case of Chinese journalist Zhang Zhan is particularly disturbing. Zhan was sentenced to 4 years imprisonment for truthjng reporting on Covid-19. She was charged with “picking a quarrel and provoking trouble”, which sounds like something straight out of the Salem Witch trails. Trump has picked plenty of quarrels and provoked trouble but where do we draw the line between being silenced and being arrested?

It’s also a reminder that a handful of individuals have the power to silence a president. One part of me is doing backflips over the fact, in my opinion Trump’s hate speech has been called out and stopped but doesn’t it all feel a bit ‘1984’ ish?

Social media has been lit, with people arguing both sides of the case. Some have said Twitter, Facebook and Instagram are owned by private companies and they can do what they like when individuals break their rules. People have also argued that long before social media, presidents relied on different forms of communications like the press or “ Fake News” as Trump calls it, TV and radio and Trump’s free speech hasn’t been compromised. I do think Trump crossed the line with the storming of the Senate, if he was from a different part of the world it would be called what it really was…a failed coup.

In the same way racist graffiti, threatening language and violence isn’t tolerated, I do think it was right for Trump to be removed but why now and not anytime over the past few years where he has stirred up hate? Is Trump’s removal a case of too little, too late and a cynical ploy now the President is on the way out and can’t rain vengeance upon Twitter, Instagram and Facebook? These platforms were all happy to watch Trump and not say anything when he spoke about grabbing women by the pussy and called Mexicans, “drug dealers, criminals and rapists”. Why now?

It does bother me that unelected founders of social media platforms with the influence over millions have the power to decide who gets an audience and when. Who decides who gets cut off? What about other world leaders, celebrities and individuals with questionable views and human right violations? German Chancellor Angela Merkel has also surprising questioned Twitter’s ban calling it “problematic” and said through a spokesman that the president’s ability to express his opinion is a fundamental right of “elementary significance”. France’s finance minister Bruno Le Maire also echoed Merkel’s concerns when he told France Intel, “Digital regulation should not be done by the digital oligarchy itself . . . Regulation of the digital arena is a matter for the sovereign people, governments and the judiciary.”

History teaches us what happens when world leaders who use new forms of communication go unchecked and unchallenged, like Italian facist leader Mussolini and his use of the radio for his propaganda. I do feel there is something cynical about Trump’s ban, only days away from him being stripped of presidential power.

Trump has been muzzled ‘The Handmaiden’s Tale’ style but what if this was Martin Luther King in the 60s and the powers that be thought his calls for civil rights was inciting violence? What if this was the Quakers calling for the abolition of slavery and calling for the destruction of the economic system that stood for hundreds of years to be toppled? Whether Trump resigns, is impeached or gently gives up the reigns of his powers, I don’t think he will be silenced for long and as he said after the Senate riots, “our incredible journey is only just beginning”.

Am I glad Trump has been cut off after what feels like years of us being collectively groomed and desensitised to his hateful rhetoric. Yes. Am I conflicted and concerned about his freedom of speech being compromised by a handful of powerful and unchecked social media Dons. Yes. I think Trump’s words and metaphorical winks to his followers when it came to the storming of the Senate, is part of his undoing. Sometimes I think people need access and the ability to be the author of their own demise….literally.

Bath Body Works Dropped Its Holiday Line, and We Have the First Look

Glastonbury 2021 is *officially* cancelled due to the on-going pandemic