The film will undoubtedly be an incredibly difficult watch, but it’s already been praised by critics and reviewers. In fact, Pieces of a Woman is already tipped as an Oscars contender, with Vanessa Kirby (who many will recognise as Princess Margaret from the first two series of The Crown) already snapping up ‘Best Actress’ at Venice Film Festival

Netflix have released a first look trailer for upcoming film Pieces of a Woman, and it looks to be one of their most powerful and emotional original movies yet.

Pieces of a Woman stars Vanessa Kirby as Martha Carson and Shia LeBeouf as Sean Carson, a Boston couple who plan a home birth after Martha falls pregnant.

But tragically, things end in heartbreak and they lose the baby. The film is about how Martha begins to navigate such unfathomable loss and grief, while suing her midwife (played by Molly Parker) for criminal negligence and enduring the accompanying media attention and court case, as well as fractured relationships with Sean and her overbearing mother. 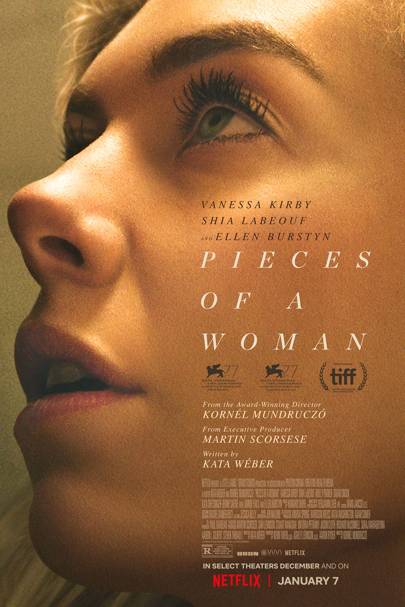 Pieces of a Woman marks the English-language debut for both Hungarian director Kornél Mundruczó and screenwriter Kata Wéber. Accompanying them is none other than Martin Scorsese, who produces the film.

We wouldn’t be surprised if she was up for the same gong at the Academy Awards, given her commitment to the role of grieving Martha. As she’s never given birth herself, Kirby prepared for the role by watching endless documentaries and videos, and shadowed midwives in a hospital in North London, where she even got to be in the room for a real-life birth.

It’s safe to say her performance – and the film itself – is going to be astonishing.

Pieces of a Woman is out on 7th January 2021 and in some cinemas via limited theatrical release on 30th December 2020.

It’s Safe to Say Dua Lipa Was ‘Hotter Than Hell’

Schitt’s Creek Cast Who Watched the Series Finale Over Zoom