In New York City – the land of sky-high rents for often low-value spaces – it’s nearly unheard of to lease the same apartment for more than a decade. To move is to escape (and hopefully to upgrade).

But Greg Buntain, founder of cult-favorite design house Fort Standard, has been in his Brooklyn one-bedroom for 12 years, ever since the summer after his sophomore year at Pratt, where he was studying industrial design with aspirations of becoming a furniture designer. “It’s definitely grown up with the brand,” he says of the floor-through apartment, a prewar space painted crisp white and dotted with warm wood accents, many of his own making.

“When I first moved in, I wanted to figure out what I wanted to do, figure myself out and the direction of my work.” Back then, he says, it “looked like any other college kid’s apartment,” a two-bedroom where he lived with various roommates and IKEA furnishings. How things have changed.

In 2008, Greg graduated and started working for a small furniture manufacturer. By 2011 he’d founded Fort Standard, his own contemporary design house for custom furnishings. 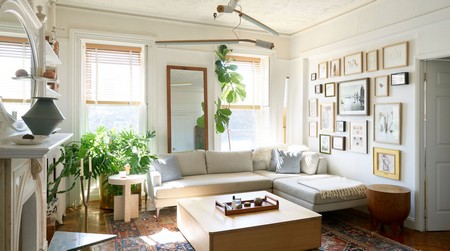 During this transitional time, his prototypes started popping up at home, a habit that would come to define the look of the rapidly maturing apartment: Above the stove, some angular cutting boards and a rolling pin he turned for his then-girlfriend, now-wife, Isabel, are hung like art; and along a wall, a set of slatted wood shelves were at some point made to replace the previous IKEA ones. A sectional sofa wraps around a boxy wood coffee table with a lid that lifts up, as if levitating, to reveal storage underneath – that one wasn’t a product prototype, just an invention to make good use of the small space. But by this point, much of the apartment is a Fort Standard design at one stage or another, a work-life overlap that Greg says is constantly improving his product line.

“It was an interesting experience, making one of our own dining tables for our own personal use. It forced me to consider it in a way I previously hadn’t,” he says. The legs, he realized, could be adjusted slightly to better accommodate a variety of seating arrangements, and a sharp square edge could be softened to a more family-friendly rounded corner.

The same went for their Elevate side table, which he’s been living with for a few years: “I changed the proportions of that table pretty significantly. The joinery that was used… let’s just say it was improved upon.” And now, as the brand moves more confidently into tabletop and accessories in their FS Objects line, it’s not just furniture but also smaller home goods that are being tested in real time at Greg’s place. Maybe that knife block will finally make its debut – after some adjustments, of course. “It’s like anything,” he quips. “I’m not afraid to change something for the fear that it’s not going to be the same. If I see a way to better something, I’m going to do it.”

Tour the apartment below to see all the ways Greg customized it.

A Fort Standard Column Dining Table with angled legs holds court in the dining room; its (sharp) squared-off corners were the inspiration for more rounded ones in new versions of the design. Antlers act as hooks on the wall, and an assortment of mixed-and-matched chairs prove there’s no one right way to set a table.

“When I first made that, I Instagrammed it and had some immediate requests for similar ones,” Greg says of the now-infamous knife block. He embedded rare earth magnets into the wood where you can’t see them, creating a very minimal, functional result. The technique came in handy. “Years later, we were making these big stone cabinets and had the idea to embed magnets into the stone,” he recalls. “You don’t see them there, but they draw the doors closed and keep them closed.”

Outside of the furniture upgrades, as a renter Greg hasn’t had to update the space itself too much (though he does repairs throughout the building for the 85-year-old landlord). The kitchen, however, has seen some changes: They painted the cabinets dark gray and stuck new bright white linoleum over the old linoleum floor.

Greg’s wife, Isabel, who handles special projects and collaborations for Warby Parker, has also had a say in how the apartment evolved. To hide some of their appliances, like a toaster and a microwave, she devised a little curtained storage unit for an underutilized corner with a bit of extra counter space and shelves above. Leather straps keep the nook from looking ordinary. “It’s kind of like, what is a simple yet interesting answer to these things?” says Greg.

The ingenious coffee table uses gas springs and parallel linkage so that the top stays completely level as it’s raised 18 inches to reveal the storage beneath. The lid also comes up and over the sofa as it’s raised, so they can use it as a TV table. This room is actually meant to be the master bedroom, but they decided to use it as a more comfortably sized living room. The lighting fixture is a Fort Standard Counterweight Mobile.

The designated half-bedroom, which is much smaller, is where the couple sleeps – the bed itself Greg designed just to suit the room, with big sliding storage underneath. Textured plaster was left as it is, a kind of foil to the super-streamlined Fort Standard product shapes.

Where the landlord’s stairs climb over their apartment, the roof slants dramatically, causing a funny little hallway alcove that Greg at first wasn’t sure what to do with. “We stuck a little comfortable chair over there and built some shelves overhead for storage. You can’t stand in the space, you have to sit down, but it creates this cozy little nook. My wife always says it’s her favorite room in the apartment.”

The assortment of prototypes in Greg’s apartment pretty closely approximates where he’s taking the Fort Standard brand: a mix of thought-provoking custom statement pieces and smaller decorative accents, everything designed with life in mind. “When we started Fort Standard, the goal was always to build furniture without having the intention of building a furniture company,” Greg says. Along the way, he built a home. 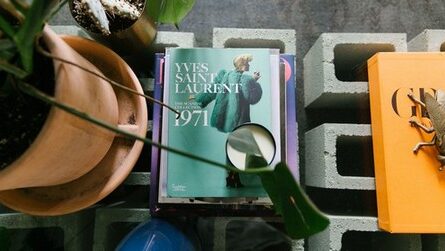 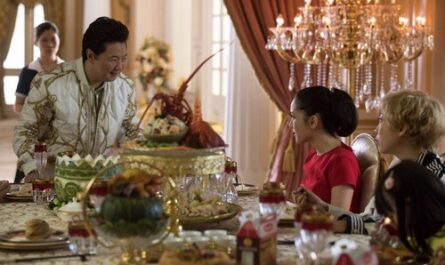 Here’s Why All the Sets in Crazy Rich Asians Look So Authentic and, Well, Rich