The unnamed three-year-old is believed to have developed the infection after her father, who had a cold sore, kissed her. A toddler was left covered in an angry rash across her hands and wrists after catching herpes.

Doctors initially dismissed her symptoms as eczema and sent her home with antihistamines, as well as antibiotic and steroid creams.

When she was rushed back to Hospital de Braga, Portugal, a week later, after her rash failed to go down, the girl’s mother revealed her father was battling a cold sore.

After being prescribed herpes medication, her rash disappeared in 10 days.

This comes after horrific photos released last month show a three-month-old baby covered in bleeding blisters after his herpes-infected mother gave him cold sores after kissing the infant on the lips.

Herpes can be serious in young children due to their immune systems not being fully developed. 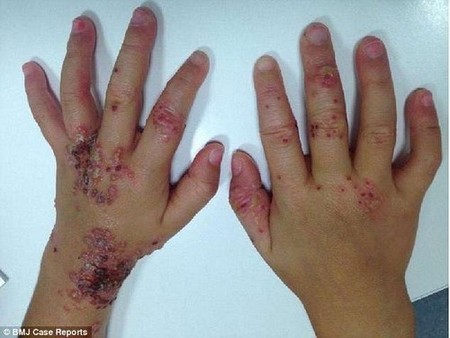 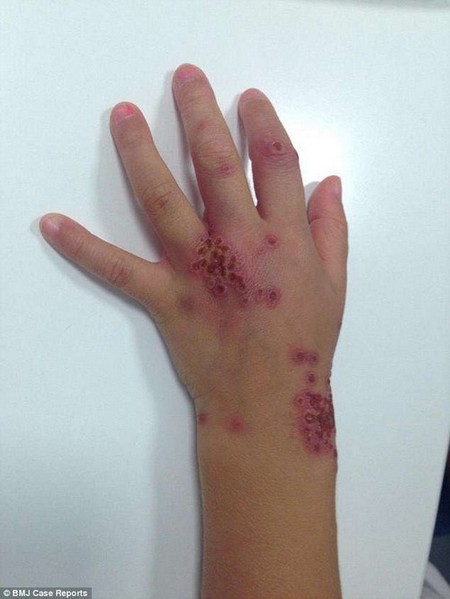 The herpes viruses cause cold sores, which most commonly appear on the lips or genitals.

They affect around seven in 10 people in the UK.

Cold sores on the lips most commonly get passed on by being kissed by someone with an active cold sore.

They begin as a small red patch that blisters before bursting, leaving a raw area that scabs.

Cold sores are only transmitted by direct skin contact, not by sharing items such as towels or cutlery.

Once infected, sufferers may experience a fever and flu-like symptoms.

After healing, cold sores can reappear if triggered by stress, illness, alcohol or too much sunlight.

Antiviral medication may be prescribed if someone frequently suffers outbreaks.

Infections can be serious in young children

Dr Inês Medeiros, who treated the girl, wrote in the BMJ Case Report: ‘Herpes simplex viruses cause a variety of illnesses, depending on the anatomic site where the infection is initiated, the immune state of the host and whether the symptoms reflect primary or recurrent infection

‘Infections tend to be unilateral, mild and self-limiting, except in the immunocompromised patient and newborns.’

The three-month-old boy who also caught herpes from a kiss was taken for medical treatment in China when his body broke out in sores and blisters.

He also had a high fever due to the infection going untreated for days.

The baby was first taken to a clinic before being transferred to a hospital in the Zhejiang Province, east China.

Doctors were concerned for the child and thought he was suffering from a skin condition until tests confirmed it was the herpes simplex virus 1/ HSV-1.

Doctor Zhu Haiqiao told The Sun: ‘The three-month-old’s body, and especially his face and head, were red and covered in sores. It was painful to look at.’

Luckily, the boy was treated and has been sent home.

The child was taken for medical treatment in China when his body broke out in sores and blisters, and he battled a high fever due to the infection going untreated for days

CDC warns not to eat romaine lettuce if source unknown