If gazpacho – a dish from Andalusia (Carmen, by the way, also comes from Seville, the capital of Andalusia), then paella is the offspring of Valencia. The latter is known for its cathedral, where the cup is kept, which is considered the Holy Grail.

Valencians love paella and are very offended when foreigners call their favorite dish rice with seafood. In fact, the list of possible ingredients is much longer and can include not only a variety of seasonal vegetables, but also rabbit, chicken or duck.

During its history, the dish had time to build up legends. One of them tells how the servants of the Moorish ruler (who had been conquered for a long time by the valiant Christians) after the next banquet dared the remains from the master’s table into one large pan to cook their own supper. Hence the erroneous version of the origin of the paella from the Arabic word “baqiyah”, meaning the remnants.

There is a nice story, according to which the word “paella” is derived from “para ella” (which means “for her”). Say, this dish once a week, hot Spanish guys cooked for their girls. In fact, everything is much more prosaic. Its name is Paella received in honor of the frying pan in which it is prepared. In Sanskrit there was the word “pa”, which meant “to drink”. It was from him that the Latin names of various cup-shaped devices (patera, patina 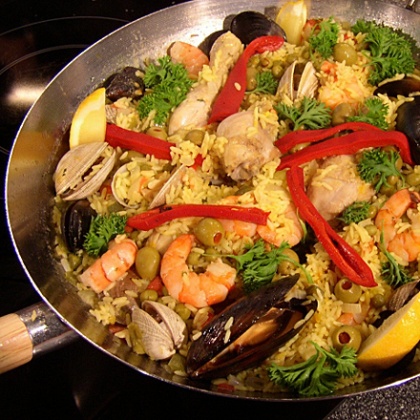 Spain retains the heritage of two cultures – the Roman one, thanks to which this sonorous vessel appeared, and the Arabian one, which provided the macho with the basis for paella – rice. For sure, the Valencian tradition to cook for holidays paella in the open air in a huge pan has Arab roots. By the way, earlier the paella was prepared exclusively by men, and they say that this tradition is being revived.

Previously, this simple dish was eaten directly from a frying pan, sitting on the chairs around it, like knights around a round table. According to the lucky ones who tried paella in Valencia, the paella valenciana is prepared correctly and tasty only there. Although if you ask two Spaniards how to cook paella correctly, you will have two different recipes. The presence of a rabbit in the recipes of paella is quite natural.

The name of the country – Spain – came from the ancient Phoenician “Gy-spanim”, which means “shore of rabbits”. These animals were discovered in great numbers by Phoenician seafarers as early as 1100 BC. Soon, rabbit farms appeared, and the dietary meat of the ears went into action.

Depending on the ingredients in the restaurant menu, you can usually find the following: 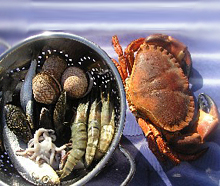 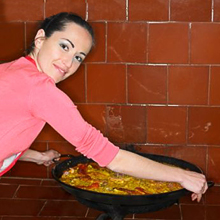 • Note the broth in which the rice will be quenched. Meat and seafood will fill it with a special taste. And to strengthen it, you can, of course, add a bouillon cube, but it is better to replace it with aromatic herbs and roots.

• Rice is the basis of paella. Spaniards usually use medium grained rice varieties, ideally – Spanish Iberian rice: it absorbs the aromas of the rest of the ingredients, does not boil, but gives the paella a slightly viscous consistency.

• Spaniards do not abuse spices, trying to preserve the natural taste of ingredients, but still in saffron saffron is needed (namely saffron, not turmeric) – for golden color, as well as garlic.

• Use the right dishes. Unlike pilau – a distant relative of paella – the bottom of the pan should be flat, not spherical. The flat, thick bottom, large surface and low sides of the frying pan are not the whims of Spanish culinary experts. Due to this, the rice is evenly distributed and cooked (the rice layer should not be more than 1 centimeter).

If the mixture of meat and rice desperately resembles a boring pilaf, try to cook paella – the habitual taste of a chicken will successfully shade seafood.

1. Thaw the mixture of seafood. Cut chicken into small pieces. Squids peel from the entrails and peels, cut half with large rings, and half with small pieces. Half the fish cut into long pieces, the remaining fish – small pieces, like squid.
2. Preheat a large frying pan, pour in the olive oil, so that it covers the entire bottom of the frying pan. Spread the oil so that the products do not have time to give the juice, but only crusted. Add the salted chicken to a frying pan and fry over high heat for 3 minutes. Inside the chicken should remain almost damp.
3. Add cubes of bell pepper and fry for 2 more minutes. Pepper is only cooked, but will remain crispy. Put the chopped garlic and mix again.
4. Put in the pan small pieces of fish and squid and a mixture of seafood. Reduce a little fire, stir-fry, stirring, for 3-5 minutes.
5. Canned tomatoes peel, chop and put in a frying pan. Add the fire and cook until two thirds of the liquid evaporates.
6. Pour the washed rice into the pan and mix. Add saffron and increase the fire.
7. Pour a warm broth or water into the paella, season with salt, mix and smooth the surface. Bring the paella to a boil and lower the fire to medium. Lay on top large pieces of fish, squid rings, mussels, shrimps and peas. Cook under the lid until the rice is tender.
8. If you want a crusty crust at the bottom, wait until the dish is ready, then add the fire to a maximum of 30-60 seconds. Remove the paella from the plate and let it sink for 10 minutes. 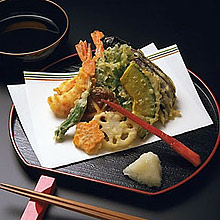 Tempura: still life on a plate