As the mother of two artistically minded singer-songwriters, it should come as no surprise that Tina Knowles Lawson is herself a prolific art connoisseur.

The mother of Grammy-winning artists Beyoncé and Solange recently welcomed Kimberly Drew, a curator and the social media manager for the Metropolitan Museum of Art, into her California home to share her personal art collection for Vanity Fair‘s September issue, and the two discussed the significance of visual representation, Lawson’s philosophy on collecting, the first work she purchased, and more.

Lawson made her first big art purchase at the age of 19, when she fell in love with an abstract painting at a furniture store. In hindsight, she realizes it was most likely a reproduction, but that painting showed her how good it felt to live with art. She made a point to collect and support African American artists, especially while raising her daughters. “I’m so happy that I did, because both of them are really aware of their culture, and I think a lot of that had to do with looking at those images every day, those strong images,” she tells VF. “I think it’s something to say that my introduction to art was Black art,” said Solange, in an interview with Surface magazine.

Among the artists in Lawson’s collection are celebrated Harlem Renaissance painters, such as Hale Woodruff, Romare Bearden, and Charles Alston, mixed with works by emerging artists like Genevieve Gaignard and Toyin Ojih Odutola. A series of works by Robert Pruitt, her favorite contemporary artist, hung in her home for a while, until Beyonce “permanently borrowed” them. 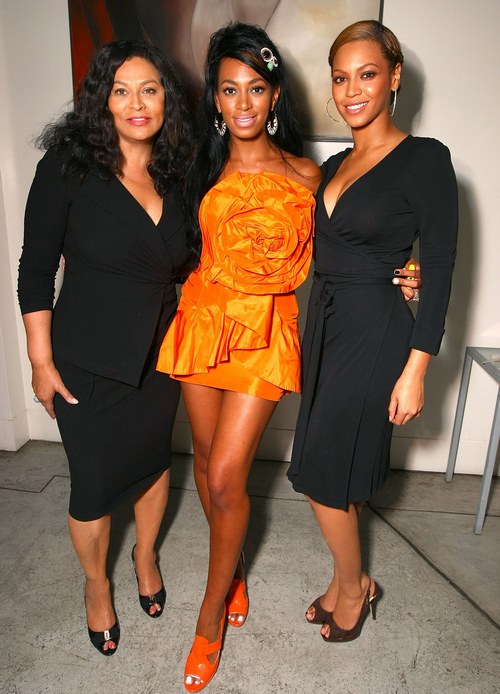 While many collectors gravitate exclusively towards blue-chip artists and works that are poised to amass value over time, Lawson prefers to have what she calls a spiritual relationship, rather than a materialistic one, with her art. “I love collecting and knowing the history of the artist,” says Lawson, “I have a storage facility with [books on], probably, every African American artist’s history.”

That Lawson values art for art’s sake rather than for its monetary value should go without saying; it would be hard to believe that someone who sees art as just a commodity could raise children who make such informed artistic references in their respective work. This past June, Beyoncé and husband Jay Z released a music video for a single off of their joint album that was shot at the Louvre in Paris – arguably the gatekeeping institution at the forefront of the art world.

For the museum to grant that kind of access meant the establishment saw artistic integrity in the couple’s video treatment and aim to recontextualize Western classical art. Solange is also no stranger to intertwining with the art world; she has performed at the Guggenheim in New York; the Chinati Foundation in Marfa, Texas; the Tate Modern in London; and most recently at the Hammer in Los Angeles, where she debuted a video and dance performance titled Metatronia (Metatron’s Cube), that features her own sculptural work.

Lawson’s personal collection is built partially around works by artists with whom she’s developed relationships, like Monica Stewart and Robert Pruitt, but is also amassed at auction. She tried her hand at bidding over the phone, aiming to buy something inexpensive, but ended up purchasing a piece by Sam Gilliam and two Picasso lithographs. Her granddaughter, Blue Ivy, has a penchant for the auction house, too – at this year’s Wearable Art Gala, which Lawson founded, Blue was seen gleefully bidding against Tyler Perry on a portrait of Sidney Poitier.

Other artists included in Lawson’s collection are Elizabeth Catlett, Henry Ossawa Tanner, Kenyatta A.C. Hinkle, John Biggers, and Kermit Oliver, who, Lawson casually explains to VF, is the only American in history to have designed scarves for Hermès, but chose to continue working with the postal service to stay humble. “If my sister and my project feels like an ‘awakening’ to some,” Solange told The New York Times, “I am constantly saying that we both grew up in a home with two words: Tina Knowles.”

The Coolest Hairstyle Trends Everyone Will Be Wearing This Year