What do you see when you think of an engineer? Maybe they’ve got a hard hat on. Or perhaps they’re bent over blue prints with some very technical equipment in hand.

But whatever you picture, chances are you’re picturing a man. It’s not surprising; like many other fields, engineering is still predominantly a male profession. But that didn’t stop Veronica Alanis from getting to the top of her game, landing her dream job as Advanced Design Engineer at Dyson, and working on the revolutionary Airwrap Styler.

I studied industrial design in Mexico – in my home town. It was part of the engineering school in my university. I did my bachelor’s degree there and then I got a scholarship to go wherever I wanted so I chose for some bizarre reason to go to Scotland where I went to Edinburgh university and did a Master’s degree in sustainable design. I discovered Dyson in my student halls and I was like “woah this vacuum cleaner is amazing”.

As a product designer, the design of the vacuum cleaner was the first thing that caught my eye. It looks so different and it works like nothing else I’d seen. But even though I was intrigued, I never thought I would work there in a million years.

My first experience with Dyson had me hooked”

I discovered Dyson while I was studying in Scotland. The first time I encountered it was in my student halls and I was like “woah, this vacuum cleaner is amazing.” And as a product designer, the design of the vacuum cleaner was the first thing that caught my eye. It looks so different and it works like nothing else I’d seen. But even though I was intrigued, I never thought I would work there in a million years.

”I took a chance and emailed my portfolio”

After my masters, I went back to Mexico to work for a French company that does electromagnetic stuff. But I always had this little voice in my head bugging me like, “maybe Dyson is where I’m meant to be.” I mean, it’s the best place you can work as a product designer, so I just took a long shot and sent my portfolio to someone at Dyson.

I just searched on Linkedin for an HR contact and found an email address of someone I’d never met before and sent them an email out of the blue. Next thing I know, I have a Skype interview. We went through three different interviews on Skype and then I flew over to Dyson to have an in-person interview. They offered me the job and then I moved over. 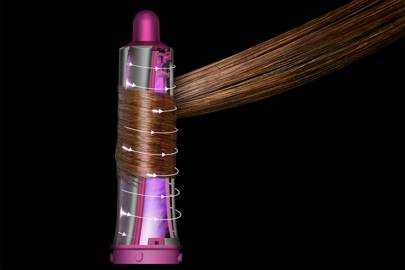 I didn’t know at all that they were doing a personal care product. Back then the supersonic dryer hadn’t launched yet, so for all I knew I was working on vacuum cleaners and I was pretty happy about that. Then, on my first day, my manager told me I was working on this new category and showed me the soon-to-be-launched Supersonic. I just lost my mind. It was the best thing ever, to not only be working at Dyson, but to be working on something that I use and love using. I went straight into working on the Airwrap.

I was one of the first people to test the Dyson Airwrap styling tool, so did it live up to the hype?

”Being an engineer has its challenges”

My part in the team was to look after the air flow and to work with all this technology that had been packed into such a small tube. The more you pack things together, the more difficult it is for the air to flow and I had to get 13.5 litres of air through there per second. If someone modified anything within the design and the structure of the Airwrap, it had a big effect on air flow. That was the biggest technical challenge.

”Asking questions is the best thing you can do”

Engineering is all about asking questions and understanding how something works, so the best thing you can do is ask as many as you can.