Do you ever take a real good look in your loo before you flush? No doubt you’ve probably taken a curious peak at your poo before (especially if it felt like an impressive one) – but what about the more frequent number one?

As it turns out, you can tell a lot about a person from their wee. From the colour, to the smell and the frequency, here’s what your wee says about you…

The average person empties their bladder around 6-7 times over a 24 hour period. However, it’s not uncommon to go over this, especially if you’re drinking lots.

“The normal range for 24-hour urine volume is 800 to 2,000 millilitres per day”, says Dr Imogen Bexfield, Medical Director at White Swan Aesthetics. “This is based on an average fluid intake of approximately two litres per day.” 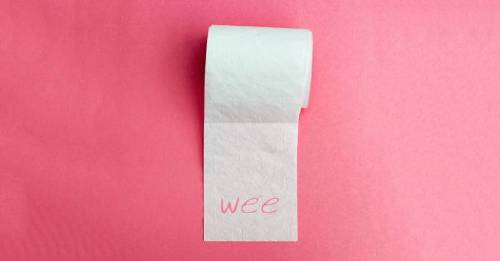 “Medications, supplements, certain food and beverages can also all affect the number of times we pee per day. For example, coffee and alcohol are diuretics.”

A sudden increase in frequency with no notable cause, could be a sign of something more serious such as an overactive bladder, pregnancy, a UTI or kidney infection. If this is the case, contact your GP.

Here’s how to poo more regularly, what’s considered ‘normal’ and other fun facts about your sh*t

If it’s yellow, you can mellow

Some people think that if they’re drinking ‘enough’ water, their wee should be almost clear. To which we say, there ain’t nothing wrong with yellow bro.

“Normal urine colour ranges from pale yellow to deep amber”, says Dr Imogen. “Changes in colour are normal and can be dictated by the food and drink you’re consuming.”

It is true however, that the darker your wee, the more dehydrated you are. “When we’re dehydrated, our kidneys (which filter our waste) tell the body to hold onto any water it takes”, says Dr Imogen. “As a result, we have less water in our urine, which causes it to become more concentrated and darker.”

While most changes in colour are harmless, if you do see something that concerns you, such as dark pink or red urine with no identifiable cause, be sure to contact your GP immediately.

Most smells are harmless…

The number one cause for smelly wee is dehydration, which is why you probably find your piss to be at its most potent after a night of replacing water with wine.

“Certain types of food can also cause it to smell different”, says Dr Imogen. “Have you ever eaten asparagus and noticed that your wee smelled a bit ‘off’ afterwards?”

“This is because its pigments are present in urine. Certain foods like, onions, Brussel sprouts, spices, garlic, curry, salmon, alcohol, and even coffee can change the smell.”

Sometimes pee happens, before we have the time of thought to find a toilet.

“If a woman leaks urine when laughing, sneezing, coughing or exercising strenuously, it is called stress incontinence and is generally related to a weakness in the urethra. This is common after child birth. Stress incontinence can also be related to being overweight, which puts additional pressure on a person’s pelvic floor muscle.”

Urge incontinence on the other hand, is a condition related to an overactive bladder, in which the bladder muscle begins to squeeze prematurely.

“People who feel an overwhelming urgency to urinate and leak urine before reaching the toilet may have urge incontinence.”

What your wee is made of

95 per cent of your wee is made of water. The rest of it is a ‘complex combination of ingredients that include urea, chloride, sodium, potassium, creatinine and other dissolved ions, plus various inorganic and organic compounds.’

As Dr Imogen puts it: “It is basically your body’s liquid waste.”

So go forth and whizz your waste away.

I tried period pants and this is what happened

The ultimate guide to avoiding pongy pits in the heat

The forest therapy trend is infiltrating our beauty regime, so can it improve our mental wellbeing?