Get ready for another wedding ceremony on This Is Us! After Kate and Toby tied the knot last season, it looks like another Pearson family member will be walking down the aisle in season three.

It’s obviously not Kate since she is already married, but it’s possible that Randall and Beth are renewing their vows. Maybe after their relationship woes this season, they decide to start fresh. Watson was spotted wearing an off-white gown, after all.

Although, the most likely character getting married is probably Kevin. He has gotten pretty close to Zoe throughout this season, and seeing as actress Melanie Liburd isn’t pictured on set, they could be trying to save the surprise (and the reveal of her wedding dress) for the actual episode. 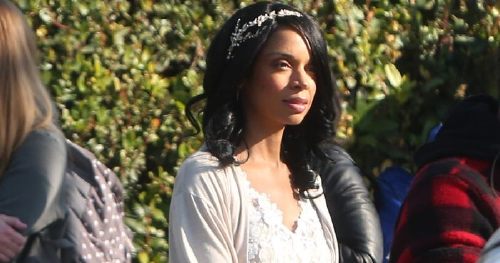 That could also explain Watson’s fancy getup – she’s the matron of honor for her cousin! Of course, we’re still not sure why Moore is wearing her ’90s era Rebecca wig. Wow, we have a lot of theorizing to do.