The original It bag is back. As the trend for everything Nineties rolls on (this season bucket hats, minimal white and tie-dye are all back), it’s only right that Fendi’s iconic Baguette bag, which was created in 1997, has another turn in the spotlight.

At the time, the Baguette quickly transcended any previous bag trends and became a phenomena with women desperate to own as many designs as possible. There had never been such a fashionable yet high-end bag – yes, there were classics like Chanel’s 2.55 and Hermes’ Kelly and Birkin styles but the Baguette was new and fashion-led. It’s desirability was two-fold… there were dozens of different designs to collect and it came in a tactile easy-to-carry silhouette.

I was obsessed with an indigo denim version (I was obsessed with anything indigo denim in the late Nineties) which had visible contrast stitching around the edges. NB contrast stitching – that’s another trend that is back in a big way this season… But whatever your personal style or aesthetic preference there was a Baguette for you. Since it’s launch the Baguette has gone through over a thousand iterations of it’s classic simple shape.

There were so many finishes – ranging from street-wise denim to the most opulent and heavily bead-encrusted versions – letting it become the most egalitarian of high fashion fads. 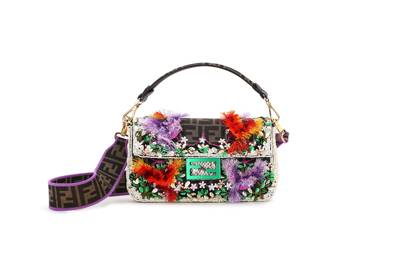 Named the Baguette, in tribute to the French bread, and designed to nestle under your arm (just like the way the French carry their actual baguettes) soon after the Italian brand – designed by Silvia Venturini Fendi and Karl Lagerfeld – launched a smaller sister style, the Croissant, which was as equally crescent shaped and sweet as it’s patisserie namesake.

But now, we’re celebrating the full on return of the Baguette. Fendi have launched a new series of short films to celebrate the bags – and friendship. #BaguetteFriendsForever features a clever mix of vintage styles and brand new Baguettes (true fashion fans should try to spot the different styles) and tales of girl squads around the world.

The films feature an array of international influencers (Korean DJ @peggygou, NY model @eboneedavis and blogger @cardaur are all new names you’ll be following from now on) and there is a cameo from the world’s most famous Baguette fan, Sarah Jessica Parker as Carrie Bradshaw. Remember the episode where Carrie was mugged? The infamous protest that, “This isn’t a bag, it’s a baguette” gets another airing as a purple sequinned style take centre stage in the short film.

This isn’t the first time a Nineties icon had a millennial moment. Last year Dior relaunched it’s Saddle Bag – a favourite with It girls of the era like Paris Hilton, and Ms Bradshaw of course, but we’re here for the Baguette V2. This time round I’m coveting another denim style… indigo of course, but edged with neon stitching – 2019’s hottest colour trend (but first seen in the Nineties.) If you need a reason to invest this time around, just tell any non-believers that every trend is cyclical. The Baguette will be back.

These are officially the hottest fashion brands, in the world right now

We discuss the myths and misconceptions surrounding black women