From the remote but epic Nike headquarters in Portland Oregon, Nike’s senior product line manager for Running Footwear, Tara Schick, dictates THE trainer trends that will kick your LYF into shape from the gym bag and beyond.

As a super-charged girl boss and proud, Tara has aptly headed up a THOUSAND strong team (no joke!) who have designed a trainer that is specifically designed to give runners more energy, Nike’s Zoom Pegasus Turbo.

When did you first realise sport was a male dominated space?

I grew up playing soccer, followed by running, and it was still kind of a weird time to be a female athlete. I think that spanned the entire globe at the time and was especially evident as a relatively young kid playing a sport that has been dominated by men. 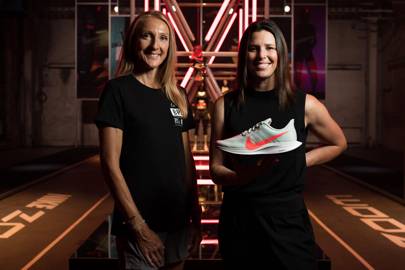 Is now a better time than ever to be a woman in a powerful business?

Coming into my professional career, it’s been a fantastic time to be where we are with launching our products and bringing female athletes out. We had our whole campaign for the Nike Pegasus 35, which was all female-based, and for me it’s nice to see people putting money where their mouth is. I feel like there’s a lot going on in terms of hitting that cusp of females being able to be in a workplace that they love and celebrate and show off what they can do. It’s amazing to come into a place everyday that you feel awesome working in.

Do you identify with the term ‘girl boss’?

I would say ‘yes’ but I don ‘t know if I would brag about being a girl boss. It’s interesting because even in my role as product line manager, I work with other females that are in all different roles from engineering, development, design to colour design and I think that’s what makes Nike amazing. Not only do we have gender splits, but we have a very international team so there’s a lot of richness in getting different perspectives, male and female.

What advice would you give to a young girl coming into a male-dominated industry?

It took me a while to realise this, but your intuition is so strong. So, if you feel like you would be good for something that maybe doesn’t have a tonne of females in that role, then listen to your gut – that’s the strongest thing ever! I feel like I have come into my own after soccer, after college, after working for the last ten years. Every time I go after what I’m hearing myself say inside, versus what other people are telling me, I feel more and more justified in what I’ve done and accomplished.

What is it that makes Nike trainers so special?

I do think it’s a combination of art and science coming together. We’ve got scientists that are a thousand times smarter than I will ever be coming up and saying “we want this, this and this for the human body”. Nike respects that detail can kick off the thought and they bring that to life in the products. That’s what makes our jobs challenging but fun at the same time, playing back and forth between those two things because for us, I think that’s the magic combination. If you work for innovation’s sake, you’re not going to resonate with human beings. Likewise, if you’re only going to test, you are never going to be able to brag about something that has 4% running economy.

If you were going to tell someone to invest in one trainer what would it be?

I feel like I’ve birthed a baby with the Zoom Pegasus Turbo. It is the fastest training shoe that Nike has ever made – it’s in the name. The amazing stripe activates your eye and makes it a shoe you can see from kilometres and kilometres away, because it’s so brightly contrasted. It encompasses the attitude of where we’re going. We want to brag about sh*t because we have done some amazing stuff in the last couple of years and I just feel like it encapsulates that attitude of listening to your instinct. “I wanna feel fast,” is all encompassed in the emotion of the product design and the performance.

How many people work on each trainer?

Thousands and thousands! With our top-tier innovators, we have a team of 40 in our innovation kitchen working on product, telling us about how your body responds to things, heat maps, pressure maps – it starts there. Once it gets to art team – the actual product team – we’ve got over 50 people on our floor and that doesn’t even include the experts we have overseas sitting with our factory teams, explaining how we are actually going to build the product. It’s crazy, especially for products like the Zoom Pegasus Turbo that has is so innovative.

Instagram fitness legend, Carly Rowena, on why CrossFit is the hottest workout for women (and why you shouldn’t be intimidated by it)

This classic shoe trend is finally back on the map