Hiking, canoeing, campfire sing-alongs – generations of Boy Scouts visited these 25 wooded acres on a glacial lake in Wisconsin. But one day in the 1980s Camp Delavan, named for the lake on which it sits, closed, then was divvied up and sold off.

Besides a few moldering buildings and a landscape slowly being overgrown, all that was left were the memories of the boys who had spent time there.

The Litowitz family takes to the pool.

Until 2005, that is, when Jennifer Litowitz happened upon a real estate ad. She and her husband, Alec, the founder of Magnetar Capital, had harbored a fantasy of creating a bucolic getaway for friends and family, including the couple’s four sons, Jack, Luke, Nick, and Jude, now ages 12 to 20.

Seeing the ad rekindled that dream. So they strapped baby Jude into his car seat, rounded up the other boys, and drove an hour-and-a-half north to check it out. “This is it, this is it!” Jennifer remembers thinking. “But Alec was somewhat less enthusiastic. It was in rough shape – really, really rough.”

Even so, they took the plunge. Luckily, having recently completed their main residence – a Lutyens-inspired manse in suburban Glencoe, Illinois – they already had a great design team in place: architect R. Michael Graham and designer Bruce Fox.

Jennifer was determined to salvage as much of the camp’s charm as possible. Everyone adored the huge dining hall, where a massive stone fireplace rose nearly 20 feet. Unfortunately, that whole building was structurally unsound and would have to be taken down, then rebuilt. But not before they salvaged the hearthstones, wall boards, beams, and trusses that gave the space such personality. They performed a similar feat in the building that once housed the camp’s crafts studio. After it was enlarged to make a poolside game house, they reinstalled the wall planks covered with decades of carved initials and graffiti by the Scouts.

I had this idea of a Midwestern hodgepodge that transcends time periods.

“Jennifer’s directive was ‘I want it to feel like Wisconsin in the 1940s,’ ” recalls Fox. “One of my inspirations was a childhood memory of going to family lodges in northern Michigan in the summer,” says Jennifer. “I had this idea of a Midwestern hodgepodge that transcends time periods, a very comfortable aesthetic.”

Take the old dining hall, now reconstructed as the great room, for example. At 64 feet long by 38 feet wide, it’s the kind of space that can eat up furniture and still feel empty. So Fox imagined a room that might have been put together over several generations, where interesting vintage pieces sit alongside the new. “Everything had to feel like it was found, but also be comfortable for life today,” he declares.

At one end, an eclectic mix of seating is organized around the fireplace. (“I definitely wanted a big fire circle,” says Jennifer.) At the other sits a pair of dining tables that when pushed together can seat up to 30 (not a rare occurrence in this house). To keep the surrounding squadron of chairs from creating the feeling of a conference table, Fox rhythmically upholstered them in a mix of complementary fabrics. 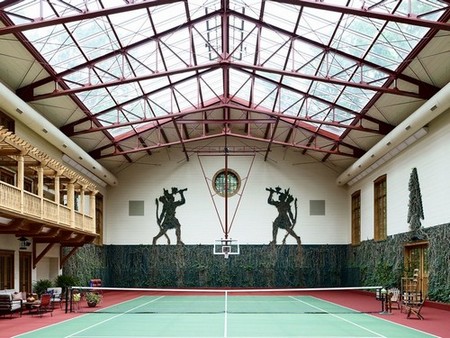 The ivy figures on the tennis house’s walls were copied from an antique weather vane.

Subtle variation governs the rest of the house, too. And Fox made sure that fabric and color choices would reinforce the theme. “If it didn’t look a little vintage, it wasn’t right,” he notes. For example, he used a blue handwoven fabric on one sofa because it felt old – “not dusty, but just like it’s been well loved” – and he strategically deployed plaids because “a little plaid here and there feels retro.” For one room’s windows, he had his curtain-maker unravel the edges of the printed cotton to create a fringe out of the fabric itself. “I kept thinking, Oh, Aunt Martha made those a long time ago,” he says. “I was just going for that feeling.”

Fox also thoughtfully chose art and accessories to add to the sense of history. He found a carved box with rope handles, made by a Boy Scout, and had it mounted for use as a side table. Another Scout piece depicting merit badges in carved wood hangs over the sunroom fireplace, and antique game boards decorate the game house. He and the clients also gathered paintings by artists associated with Chicago’s famed Art Institute. Inspired, the couple have added nostalgic pieces by Norman Rockwell and Thomas Hart Benton.

Such a compound is always a work in progress. Since the original purchase, the Litowitzes have acquired the once subdivided lots to re-create the property’s original footprint. In addition to turning a small cabin into an eight-bed bunkhouse and refurbishing the existing boathouse, the couple have commissioned new buildings, including a couple of tidy guest cabins. There’s also a notable tennis house, inspired by the famous indoor court that architects David Adler and James W. O’Connor designed in the 1920s for Chicago’s stylish Blair family.

Whatever the season, there’s a lot to do at the new and improved Camp Delavan. “In this day and age, everything’s so fast-paced and everyone’s always online,” says Jennifer, who delayed installing Wi-Fi and deliberately situated the few TVs in out-of-the-way places. “People come up and they really remember what it’s like to just have good old-fashioned fun together. That’s what I wanted it to be all about.”

Antoni Porowski May Be the Chef of Queer Eye, But Here’s Why He May Have the Best Home 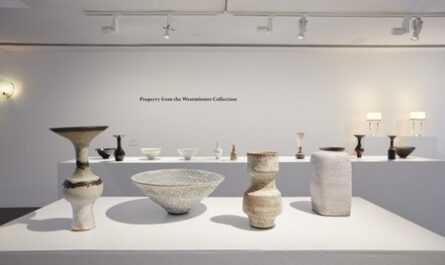 The Ceramics You’ll Want to Buy at Phillips Auction 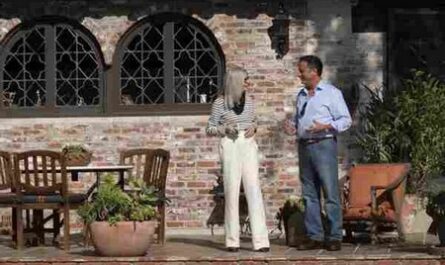