Nearly a century ago, Jean-Michel Frank made a compelling case for the compatibility of the old and the new. “The noble frames that came to us from the past can receive today’s creations. The house that we build now can welcome ancient things of beauty,” the eminent French designer wrote.

Architectural and interior designer Giancarlo Valle and his client Kevin Wendle apparently got the message. On a bluff overlooking the Atlantic Ocean in the coastal village of Watch Hill, Rhode Island, the two have deftly brokered a rapprochement between past and present, reimagining a stately 1903 “cottage” with contemporary interiors laden with treasures of 20th- and 21st-century design.

Sons Alex and Dylan, in Bonpoint tunics, run through the garden at their home in Watch Hill, Rhode Island.

First, a bit about the homeowner. A mandarin of the new-media age, Wendle has carved an extraordinary career path through the worlds of entertainment, technology, and design. His wide-ranging résumé boasts a slew of tech start-ups along with executive positions at CNET, Fox Entertainment Group, and E! Online. In the early 2000s, after riding the wave of the first internet boom, the trailblazing entrepreneur decamped to Paris, where he immersed himself in French avant-garde art, fashion, architecture, and design. 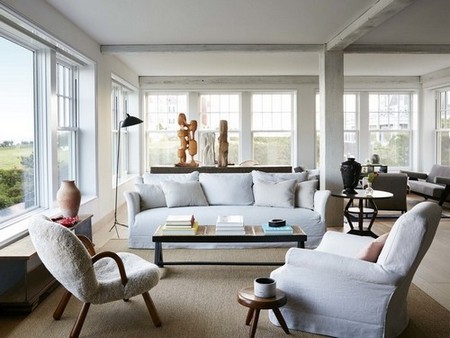 During that time, Wendle forged a fertile relationship with the then up-and-coming French designer Joseph Dirand, first as a client and subsequently as a business adviser and investor. Wendle’s obsession with travel, design, and premium real estate coalesced in his 2014 purchase of the idyllic Hotel Esencia in Tulum, Mexico. It was there, in 2016, that the budding hotelier first met Valle, at the wedding of fashion designer Jason Wu.

“We sat next to each other at one of the dinners and bonded over our mutual interests,” Valle recalls. In short order, Wendle engaged the young, New York City–based designer to shepherd the trans-formation of his recent acquisition, the great house on the picturesque bluff, into a summer home for himself, his partner, Sebastian Uribe, and their two sons, Dylan and Alex.

One might reasonably wonder how a globe-trotting entrepreneur with distinctly progressive tastes, born and raised in and around New York City, came to be the steward of a historic manse in a secluded Rhode Island summer colony. “When I was young, we’d spend weekends in Stonington, Connecticut. I’ve always been enchanted with New England beach culture,” Wendle explains. “Although Mexico is home base, I wanted my boys to feel a connection to their identity as Americans,” he adds.

The challenge was to bring the house back to life in a meaningful way, attuned to the way we like to live.

Of course, the house itself – a 10,000-square-foot shingled pile redolent of patrician East Coast style – exuded its own allure. “It was magnificently handsome,” Wendle says, describing his initial reaction to the stately home, which he discovered while vacationing at the nearby Ocean House hotel. “The challenge was to bring it back to life in a meaningful way – something stylish, yes, but more important, something comfortable for my family, attuned to the way we like to live.”

Valle, too, was seduced by the home’s arresting mien. “I fell in love with its proportions and its imposing cubic form. There was a solidity to the structure that we wanted to maintain even as we gutted the inside,” the designer says. He began by opening walls on the main floor for an easier, more gracious flow from room to room. He also streamlined the interior architectural details, eschewing elaborate crown moldings in favor of gently rounded coves and anchoring rooms with pared-down base-boards.

“It was a reductive approach intended to instill a sense of softness. At the same time, we underscored the solidity of the architecture with thick, two-feet-wide passageways between rooms, chunky inset bookcases, and fireplace mantels imported from England. Even though this was not an orthodox restoration – frankly, there was nothing left to restore – we wanted the interiors to project a level of authenticity in the materials and construction,” Valle explains. 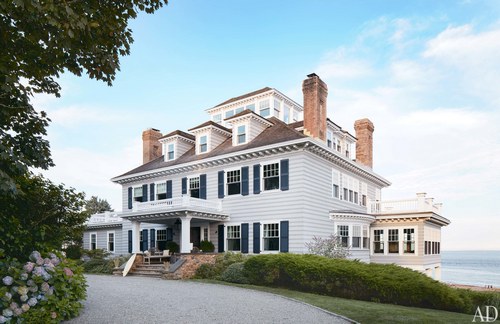 “The best thing about buying a house this size is that I was finally able to reunite furniture and art that I had stashed in storage lockers in Paris, the south of France, New York, and Los Angeles. Giancarlo and I assembled the best of the best, and we recognized opportunities to fill in the collection with new additions and custom-upholstered furniture,” Wendle says. The resulting mélange encompasses a king’s ransom in vintage furnishings by Charlotte Perriand, Le Corbusier, Pierre Jeanneret, Jean Prouvé, Willy Guhl, and Axel Einar Hjorth, all paired with contemporary gems by Faye Toogood, Rick Owens, Michael Anastassiades, Dimore Studio, Apparatus, and others.

“The homes I designed with Joseph Dirand were more black-and-white. Here in New England it’s all about the sunshine and beach, so I wanted to bring in more color,” Wendle notes. Valle obliged by juxtaposing monochrome rooms with closets painted emerald green and burgundy, a library in marine blue, and a pantry the color of radicchio.

“Giancarlo has incredible vision and taste,” Wendle says, assessing the quality of the completed project. “I wanted tradition and classic style enlivened with a contemporary spirit and a slight edge. That’s a tricky line to walk, but he pulled it off with real finesse. The house isn’t old and stodgy, and it’s not defiantly new. It’s just ours.”