Medication side effects are no joke – just because a doctor prescribes a pill doesn’t mean you’re guaranteed nothing will go wrong. Minocycline, a common acnemedication, has a particularly colorful side effect: It can reportedly turn your skin and eyes blue. 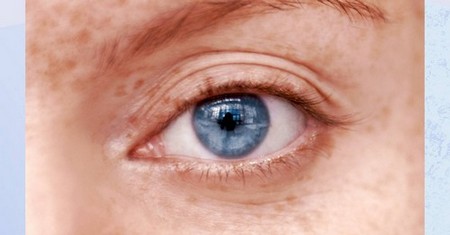 The side effect, known as drug-induced pigmentation, made news this month when a case study published in the New England Journal of Medicine examined minocycline’s role in turning the whites of the eyes (medically referred to as the “sclerae”) a murky shade of blue. Here’s what happened: the patient in the case study, a 70-year-old man, had been taking 100 milligrams of minocycline daily for 15 years to treat arthritis, which is one of the drug’s other common uses. With the extended use, his eyes turned indigo. But doctors noted that despite the color change, there seemed to be no negative impact on his vision or eye health.

The eyes weren’t the only place the patient had pigmentation – his ears were stained indigo, too. Doctors concluded he had “minocycline-induced pigmentation. Prolonged treatment with minocycline can cause blue-gray pigmentation of the skin, sclerae, pinnae [ears], fingernails, teeth, gums, and scar tissue,” the report stated.

Interestingly, the Smurf-like side effect isn’t totally unheard of. A 2016 study found that the blue-gray changes in skin color aren’t uncommon in some elderly populations taking minocycline.

Does that mean my acne medication will turn me blue?

This case isn’t cause to worry, according to the experts. The drug-induced pigmentation is “not common at all, which is fortunate since minocycline is one of our most effective acne medications!” Jennifer Chen, a board-certified dermatologist and clinical assistant professor of dermatology at the Stanford University School of Medicine, tells Allure. “Estimates range around two to 15 percent of patients taking minocycline long term.”

Doctors aren’t quite sure why the blue staining happens. In the NEJM case study, the authors hypothesized that it may have something to do with the way minocycline reacts with either melanin or iron in the body. The idea is that it may create deposits in tissues “particularly in tissues that are exposed to light,” the report states.

Doctors do know that there are three types of blue-skinned side effects. “Type I describes blue-gray pigmentation on the face in areas of scarring or inflammation; Type II describes blue-gray discoloration on normal skin on the shins and forearms; and Type III describes diffuse muddy brown discoloration in areas of sun exposure,” Sejal Shah, a board-certified dermatologist in New York City, tells Allure. “Type I and II may resolve slowly but Type III persists indefinitely. Type I is the most common and Type III is the least common.”

The expert guide to *finally* treating your hormonal skin

What side effects should I be aware of before taking minocycline for acne?

There’s no surefire way to tell if you’re predisposed to the pigmentation, though Shah notes some studies have shown it’s more common in patients being treated for autoimmune diseases. The degree to which dosage and duration affect the likelihood of blue spots is also murky. “Most reports involve patients who have been on this medication for one to three years, but there are some reports of this occurring with shorter term use,” Chen says.

According to the official data for the drug Solodyn, a brand name for minocycline, provided by the Food and Drug Administration, the pigmentation has been reported to occur with long-term use. In a statement provided to Allure by Ortho Dermatologics (a division of Valeant Pharmaceuticals), the distributors of Solodyn said: “As per disclosure in the package insert, Solodyn (minocycline) is responsible in some cases for skin or oral hyperpigmentation. Resolution usually occurs spontaneously after discontinuing the medication. The time for resolution can vary greatly from patient to patient. For the few cases that do not completely resolve or are slow to resolve, laser treatments are available.”

So, what’s the bottom line?

Chen says minocycline is still one of the most effective acne medications out there, and Shah does prescribe it (though usually not as a first line of defense) in her practice. While doctors aren’t aware of any non-cosmetic health impacts associated with the change in skin shade, it is often persistent, so it’s worth talking to your doctor about before taking a new prescription (or if you’re already on the medication). “Be vigilant for this and stop the drug immediately should you see any unnatural appearing changes in skin color,” advises Chen.

32 skin clearing foods for a glowing complexion
Spread the love