I’ve since moved on to more sophisticated methods of enhancing my lashes in hopes of making my tiny eyes look like a cartoon. Lash extensions and lifts have been the most successful, but they’re expensive and time-consuming, so finding a good mascara has been crucial. While I have some go-tos, I’d yet to find one that replicates the doll-eyed look of a lash lift.
I’ve always been enchanted by huge, cartoonish eyes. After graduating from Disney princesses, I fixed my obsession on anime characters, whose colourful outfits and huge eyelashes equally spoke to me. Early on in high school, I idolised Zooey Deschanel and her wide-eyed look, and drew Twiggy lashes on my lower lash line when I went out at night.

Then the new L’Oréal Paris Bambi Eye Mascara came along, and I knew I had something to be excited about. For starters, L’Oréal makes some of my all-time favourite mascaras (at any price point), and anything that promises crazy volume and “a doe-eyed effect” has my attention. But let’s be real here – obviously the real draw was the name. Bambi is the ultimate big-eye icon in my book. The fact that model Camille Rowe is heavily featured in the ads alongside Bambi himself just adds to my theory that this mascara was made specifically with me in mind.

Adorable branding aside, where this mascara truly stands out is the brush, which has a mix of long and short bristles to grab every lash. It’s on the spiky-plasticky side, which is great for shorter lashes like mine, yet has some heft to it to help with volume.

The first time I tested it out, I was ridiculously sick – I more closely resembled the Corpse Bride than my usual self. But after one swipe of the stuff (singing the Bambi eyes line from “This Is What Makes Us Girls” to myself, naturally), I was wowed. I looked wide awake, and all the life instantly came back to my face. It fanned out my lashes so they were super fluttery, and the brush made it seem like I have double the lashes I actually do. My lashes were instantly lifted and crazy curled (no lash curler needed!), giving me the doll-y eyes of my dreams in seconds. Essentially, it gave me the same effect as my beloved lash lift, without the trip to the salon. In short, I’m obsessed. 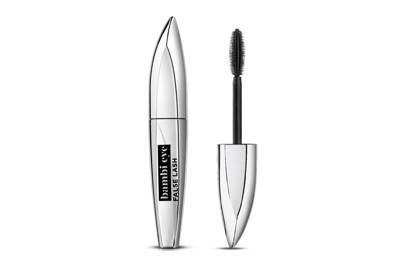 If you’re looking for a natural look, this might not be the best choice for you, though it doesn’t clump no matter how many layers I apply. It just definitely looks like you have mascara on, a look I personally love. But despite the crazy volume, I didn’t sacrifice any definition, and the inky-black formula stays on all day without any flaking or smudging.

It didn’t turn me into a cartoon character, but it came pretty damn close.

Chrissy Teigen is obsessed with this Instagram-famous GlamGlow mask