So, now all their debts are paid in full, have they really also extricated themselves of public intrigue in them in the UK? After all, if the money was what enraged us; will we leave them alone now?

It’s at the heart of the Harry and Meghan maelstrom, the vicious cycle of public interest in them, combated by an angry desire – often viewed as petulant – to lead private lives. This is often the crux of many celebrities and their hatred of the paparazzi and of online and media trolling- an often contradictory desire to be left alone, when being in the spotlight is what pays their bills.

Ah, Harry and Meghan. It’s been a hot minute since we discussed this dynamic duo, huh? Hot on the heels of the announcement last week that they have brokered a multi-million pound deal with Netflix, we now hear that the Royal couple have paid back in full the Sovereign Grant of £2.4million that allowed them to refurbish their UK base, Frogmore cottage, on the Windsor Estate.

It has been one of the greatest sticking points in what feels like the protracted and acrimonious divorce between Great Britain and the Duke and Duchess. That £2.4million of taxpayer money has been quoted endlessly, often used as the justifiable excuse for public outrage at Harry and Meghan’s desire to step back as full time Royals. Conscious of this, the pair announced their plans to become financially independent back in January – and now they have. Prince Charles even declared that the couple are no longer financially supported by him. 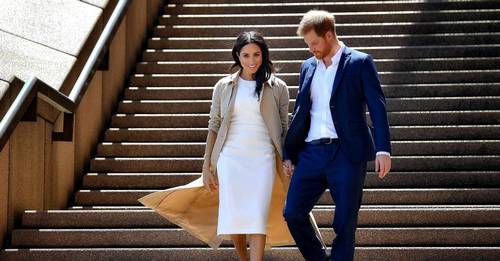 This is now literally the case for Harry and Meghan, who have divested themselves of taxpayer funding from the British people, and are surviving solely on their Netflix deal and what promises to be an eye-wateringly lucrative career as public speakers. The couple have signed with the Harry Walker speaking agency, which also represents the Obamas and the Clintons, which will enable them to (many speculate) command $1 million a speech.

But who will be interested, if they fade into the background, if they really are left alone, if they really do live private lives? It is an odd and contradictory bind. Public interest in them not only sells newspapers, it opens doors to Netflix deals, it allows them to command ludicrous fees for speaking engagements. Being in the public eye may be an irritating reality of their lives – but it is now what will pay their mortgage, what has allowed them to pay off their debts. Living publicly – in this case – pays off.

The platform afforded them by the Royal Family is often leveraged towards the greater good. This is abundantly clear from Harry and Meghan’s dedication to activism, to raising awareness for causes they care about- from female education to climate change. They will now be using their Netflix platform and their speaking engagements to do this too. Once more, they are leveraging their fame for a higher purpose- but also for a higher fee.

What seemed to irk so many in Britain about the couple was their resistance to public scrutiny, their refusal to make certain aspects of their life public, but then to accept taxpayer money. For many, this seemed an unbalanced relationship. Many more found them ungrateful, or petulant; for taking the trappings of fame and giving nothing back. Yet this anger stemmed far too often into a form of vitriolic bullying, which was flavoured nastily with racism and misogyny. The Sussexes no doubt hope that by paying back this money, they will have settled this debate. Their debts are now paid.

Unfortunately this has not happened. The backlash has already begun, with many tabloids commenting that this marks a finality in their relationship with the Royal Family which makes it very unlikely they will ever return.

The ‘transition year’ we were led to believe they were in now seems like a permanent move, with no notion of when Frogmore Cottage will be occupied again. The tone of this has been acrid and despairing, using their new financial independence as – oddly enough – another rod to batter them with.

This anger may perhaps stem from a sadness in the UK, that our brightest, boldest young Royal couple have finally cut ties with us. Maybe we wanted them to depend on us financially so we could still demand access to them, so we could still see Archie, still quibble over the denier of Meghan’s tights. But unfortunately for us, it seems the human cost far outweighed the fee for the Duke and Duchess. Harry and Meghan were unwilling to accept bullying as the price for their cottage renovations and so, in paying us back, they have settled their debt and finally made that clear.

But taxpayer money or not, the world is still watching Harry and Meghan and – while this may prove lucrative – it still leaves them exposed to criticism and condemnation. The true price of their lives will, perhaps forever, be public scrutiny. Paid in full.