Alex told Fox 10 that his friend Josh and his father, who worked with Billy, were watching the game. They told themselves, “Watch this… the Diamondbacks are about to come back for Billy.”

Alex Robertson and his brother were attending the game for more than just Alex’s birthday; it was a nod to their father, Billy, who had passed away last month after a battle with liver failure. Baseball had always brought the family together, and the game was a way of honoring their dad.

A man celebrating his 21st birthday at the Arizona Diamondbacks game on Tuesday was the recipient of a souvenir he won’t soon forget.

Alex Robertson was celebrating his 21st birthday at a baseball game, his dad’s favorite sport, when he caught the game-winning home run ball. 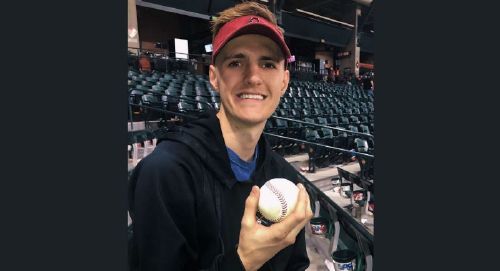 At the Tuesday night game, the team was down by one against the Texas Rangers at the bottom of the ninth when Jarrod Dyson stepped up to the plate.

Sure enough, Dyson smacked the game-winning two-run home run ball into the stands. The ball bounced between fans before it ultimately plopped into Alex’s hands – and the entire moment was serendipitous.

went to a dbacks game because it was my dad’s fav sport, he passed away on the 19th of last month tonight on my 21st birthday I caught the game winning home run. this one’s for you pops.❤️ pic.4QGO95Hg5E

“I got my tickets. I was super hyped. I got good seats, and someone was in my seats, and I looked at my brother and said, ‘Should we go get the bouncer?’ and my brother said, ‘No, it’s fine, let’s just find new seats that are open,’ and those new seats that we found were where we were when we caught the ball,” Alex said.

To make the moment even more unbelievable, Dyson has never hit a walk-off home run in this career.

“I almost started crying because it was such an emotional thing for me,” Alex told ABC. “One guy tweeted me, ‘Dyson doesn’t have a lot of power so I was wondering how he hit that ball out, after reading your tweet, now I know.’ I wanted to cry then too.”

The ball right now is in the process of being signed by Dyson, and Alex plans to frame it in a case – as well as purchase a Dyson jersey.

The story wasn’t lost on baseball fans, including those who were rooting for the opposing team.

I’m a Rangers fan,and was upset we lost that game.After seeing this, I realize there’s more to life than wins and losses.Sorry for your loss, may God bless you and your family??.I hope you had a great birthday brotha ?
The Diamondbacks are an amazing organization. Great story?

I’m no longer upset about my rangers losing the game.

There is crying in baseball. Bless you @alexrxbertsxn. Cherish that one. A gift from the heavens.

@alexrxbertsxn that is so awesome man! That baseball was definitely sent to you from your dad to show you he’s at peace. God bless you and the rest of your family! Go Diamondbacks!

“I know my dad is up there smiling for sure,” Alex said.

Koreans swear by the power of ‘nunchi’ for success and happiness