Attempting to diversify British TV has been a long road, and while there are organisations like the trade association PACT whose inclusion and diversity arm aims to help broadcasters and independent production companies develop their diversity policies, in order to recruit as widely as possible both in terms of their staff and their creative on and off screen talent.

‘There’s still a long way to go,’ says their head of inclusion and diversity, Anjani Patel. ‘As an industry we recognise that we need to get better at being more inclusive off-screen and dismantling the culture of nepotism behind the scenes in order to diversify positions of power,’ she adds.

You’d be forgiven for thinking that British TV in 2020 is incredibly and impressively diverse. Just flick through the channels – something more of us have been doing since the start of this current pandemic – and you’ll find that 23 percent of on-screen talent between August 2018 and July 2019 were of BAME origin*. 6.6 per cent of that figure is made up of Black actors which seems pretty good going if compared to how many Black people live in the UK – 3.3 per cent to be exact.

But delve a little deeper and behind the scenes you’ll find that the latest available figures from Directors UK show that in 2016 only 2.3 per cent of television episodes aired by UK broadcasters were directed by BAME directors – proving that when it comes to senior roles within TV – heck any role behind the camera – Black (and brown) people are rarely part of the creative process.

‘Working as a black female director in this industry has often felt like banging my head against a brick wall and a glass ceiling. There have been several points throughout my career where I’ve felt like I’d have more luck directing traffic then TV, because no one was willing to give me a break. I’ve been judged by a lot of white, middle-class men, who don’t know anything about you, but suddenly, you’re excluded.

Often it’s just this feeling that it’s me going round in circles trying to fulfil these never-ending lists of expectations, that they wouldn’t ask of other people, and when I’ve spoken up, I’ve been silenced by: “You’ve got a chip on your shoulder”, or: “You’re playing the race card”, ’shares award-winning drama director Christiana Ebohon-Green.

British TV can do better

Some may call it a ‘culture of nepotism’, while others like Black British, Oscar winning director, Steve McQueen, would call it ‘blatant racism’. Speaking out after his first production in the UK in 12 years directing Small Axe, six films commissioned by the BBC about the black experience from the late 1960s to the mid 1980s. McQueen shared in an op-ed in the Observer, that when they shot two episodes outside of London in Wolverhampton, they had tax breaks, incentives, and financial support, but the only BAME people were the drivers and one electrician.

While ‘in terms of heads of departments, it was just myself, and a couple of other people who were Black British. We did our best on Small Axe, but it was not good enough. The culture of the industry has to change. It’s just not healthy. It’s wrong. And yet, many people in the industry go along with it as if it is normal’, said McQueen. 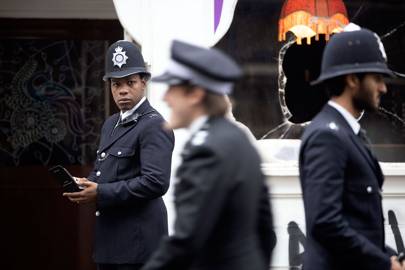 It seems they go along with it because this systemic racism suits them and because of their own biases. These biases are born from years of structural and cultural racism, and the embedding of stereotypes through the very narratives they create on screen. This is why diversity behind the camera is so important. It’s not simply about what is right and wrong it’s about the way in which predominantly white productions fuel this nations and the world’s prejudices.

What we end up with are programmes that lack authenticity, and it starts from the top. Historically British TV has been rife with stereotypical black characters, while factual programming has often glossed over Black history, or ignored it altogether.

Now as the Government reviews the funding of one of our biggest broadcasters, the BBC, it’s become commercially imperative that they like other private broadcasters create content that appeals to a diverse audience. But if the profile of commissioners remains the same, as it has done for decades – white, male, privileged – then we will continue to watch inaccurate stories depicting what they think are the experiences of black people namely – gangs, drugs, and violence.

‘I have fought against directors who seem to subconsciously believe that educated black people are somehow inauthentic, as if being uneducated and unlettered is the natural, authentic condition for people with dark skin. These tropes, this sort of unexamined thinking, when left unchallenged, can reinforce the very stereotypes and inequalities that we should be challenging,’ said broadcaster and historian David Olusoga, in his keynote speech at the Edinburgh TV Festival. And it’s these unrealistic tropes that are seeing diverse audiences turn their backs on traditional TV and have driven Black people out of the industry.

Believing himself a survivor rather than a success story, Olusoga shared that he is ‘one of the last men standing of TV’s lost generation. The generation of black and brown people who entered this industry 15, 20, 25 years ago with high hopes,’ but have been forced out due to the industries failure to support and invest in their careers.

He believes, had this lost generation of Black and brown talent been nurtured they would now be among the leaders of the TV and film industry and stereotyping and inexcusable missteps like the BBC allowing and then initially defending a white reporter using the N word in a news report would never have occurred.

A time for change

But it did, and in the wake of the killing of George Floyd, and the subsequent resurgence of the Black Lives Matter movement, we have now entered a time of reckoning where to be silent is to complicit. ‘Organisations are beginning to really sit up and pay attention.

There’s more open discussion being had in the last few months. It’s a positive step, but unfortunate that despite Black people highlighting the existence of institutional racism for decades, there seems to be more validity to this now that white people are speaking out and concurring,’ says Deborah Williams, executive director at Creative Diversity Network, a non-profit founded by the major UK broadcasters to facilitate diversity and inclusivity.

The BBC aired Michaela Cole’s I May Destroy You, where the Black British actor and writer was able to share her own disturbing experiences of assault and racism to a mainstream audience, and of course Small Axe will hit our screens soon too. The BBC have also pledged 100 million pounds to invest in increasing diversity and have given themselves a 20 per cent mandatory diversity target for off screen production teams.

‘We will be focusing on making sure we attract diverse talent, and no hiring manager can recruit without going through official channels, while no one will be promoted unless they can demonstrate that they have increased diversity within their teams, as we are focused on progressing a developing diverse talent’ explained the BBC’s head of Creative Diversity, Miranda Wayland.

Major production companies like Banijay are following suit, admitting that BLM has been a driver for the company to educate itself more and to try and understand the landscape better. ‘As a business we are braver about the words we used, we probably wouldn’t have used the words ‘racism’ in previous years,’ says Bella Lambourne, HR and Operations Director at Banijay UK.

A scary thought, as how does a company who own stakes in over 120 production companies that produce shows like Peaky Blinders, Big Brother and Black Mirror, combat something you can’t even say out loud? Now that they and others are, we are seeing paid work placements, diversity schemes, a ban on informal hiring practices, the likes of Lenny Henry hosting events educating mid and senior level programme makers on the importance of diversity, and BAFTA’s wide-ranging rule changes to boost diversity.

This will undoubtedly lead to better, more authentic TV for everyone, because ‘diverse teams from the top down ensures more diversity of thought, enabling directors of all races to tell well rounded stories that aren’t told through one lens to satisfy only one audience,’ shares Jan Genesis, multi-camera director and Directors UK Directors of Colour Committee chair.

Finally, it looks like we are on the cusp of real and lasting change!

Lizzo has announced her return to music with new single ‘Rumours’