It all begins with Emily Jacobsen, a 26-year-old teacher with a talent for creating songs inspired by animated characters. She told POPSUGAR she was “deep into quarantine” in August when she read an article about the Ratatouille attraction coming to Walt Disney World.

As a huge Disney fan, the news stuck with her and she found herself humming a song about Remy, the rat with a penchant for cooking. “I thought this was pretty funny and pretty catchy,” she said. “So I decided to make a TikTok about it with some crazy visual effects and altered voice. It was just kind of a joke to send off to family and friends.”

“Remy the Ratatouille, the rat of all my dreams.” That line has been stuck in my head for weeks as I’ve scrolled through my TikTok feed, increasingly stumbling upon clips of a Pixar-themed crowdsourced collaboration. Yes, Ratatouille, the Musical is very much a thing online right now (it was even acknowledged by Disney’s official accounts) and I had the chance to chat with the two people who started it all.

Jacobsen “never gave it a second thought” after posting her song. “But then fast forward, two months later,” she said. “With the help of some exposure and sharing from some TikTok superstars, the video caught the attention of composer, arranger, musician, Daniel Mertzlufft.” 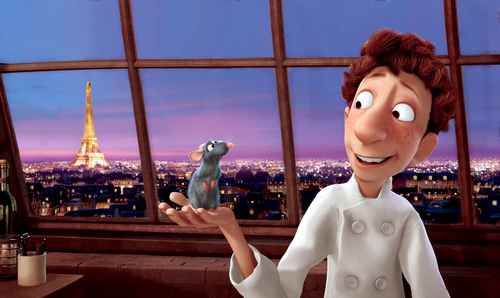 Now, this isn’t Mertzlufft’s first musical rodeo – or even his first TikTok musical. He has an extensive composing background, both on and off social media; he’s responsible for Grocery Store: The Musical, and you probably recognize him from the Thanksgiving Musical with James Corden. A friend tagged him in Jacobsen’s video and asked if this could be the next big thing. For Mertzlufft, it was a no-brainer.

“My friend tagged me in that comment, I was like, ‘Okay, I know exactly what this is,'” he said. “Looking at those words, ‘We praise you, oh, Ratatouille. May the world remember your name.’ That is the end of a show if I’ve ever heard one. So this has to be a big act two finale with the entire choir, singing about how the world will remember Remy’s name.”

Inspired by the classic Disney compositions of Alan Menken, Mertzlufft got to work. He created the sounds of an orchestra all electronically from home and enlisted the help of a friend to create a choral sound. He imagined choreography and stage notes. From Jacobsen’s perspective, “it was amazing.” She said, “I almost cried. I loved it so much. And it was kind of between my song and his arrangement that this whole Ratatouille musical movement was born.”

Once Mertzlufft’s arrangement picked up traction online, other TikTok creators started contributing their songs, costumes, vocals, dance moves, and more. The idea rapidly started to expand beyond one song until a full-blown, crowdsourced musical could be pieced together using individual stories. Users sang duets with each other, posing as characters Linguini and Colette. Tony award-winning actor Kevin Chamberlin joined in to sing “Everyone Can Cook.”

Millions of views later, it became nearly impossible to parse through a For You page without seeing Ratatouille-related videos. Playbill reposted a mock cover for the musical, the Disney Parks TikTok account submitted an “unofficial audition video,” and Pixar’s official account gave the movement a nod on Instagram. Fans are calling for the musical to become canon, either on Broadway or through a Disney project. Both Mertzlufft and Jacobsen would love to see something else happen, although Mertzlufft noted it would be difficult to give all of the creators the credit they deserve.

What makes Ratatouille specifically so special? There are many Disney movies, even Pixar movies, that you could argue are more popular, successful, or better suited for musical treatment. According to Mertzlufft, there a few factors that come into play. The movie came out in 2007, so it resonates with the Gen Z TikTokers who grew up watching it. But besides the nostalgia, Mertzlufft and Jacobsen said the film’s relatability brings people together.

“I watched it recently and I just found myself noticing these themes of feeling like an imposter or feeling like you can’t live up to your potential,” Jacobsen shared. “I feel like for a lot of adults, that’s super relatable.”

Mertzlufft shared similar sentiments. “It’s an underdog story,” he said. “There’s no reason that Remy and Linguini should work. There’s no reason that this plan should work, and it does. And they create magic together, and they couldn’t have done it without each other.” He uses this allegory to apply to the theater world, but it also sums up exactly how the TikTok musical took off in the first place. An unlikely pairing of strangers, who turn something unfathomable into pure magic. That sounds like a plot taken straight out of the Disney playbook.

Other Things a Mom Overheard on Her Son’s Zoom Lesson

I Bought an Exercise Bike That Doubles as a Desk