If you’ve seen the red flag emoji littered across your Twitter timeline this week and are wondering, ‘WTF is going on?’ then you’ve come to the right place. Here’s what the red flag emoji trend is all about, and some of the best tweets we’ve seen.

What is the red flag emoji trend?

People on Twitter have been using the red flag emoji to share a whole range of red flags that they avoid in relationships and dating. A more serious version of ‘the ick’, red flags are warning signs in what people say and do that signal a deeper, unfavourable and sometimes abusive character trait (aka, you should avoid them at all costs).

While red flags are usually referred to in the context of dating, they can also crop up in friendships and family relationships and you should *definitely* not ignore them – anyone who has ignored a red flag will vouch for that.

In true Twitter fashion, users have taken a pretty heavy aspect of forming relationships with people and put a lighthearted spin on things, pointing out funnier red flags such as, “shrek is not that good” (@yungchipotle) and, “I got an Android” (@JustJoeReacts). But hey, boundaries are boundaries and if they don’t watch Shrek and you can’t get behind that, you have to leave! 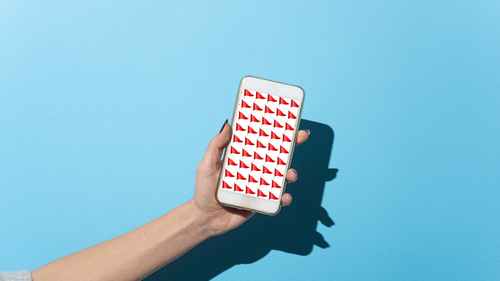 While you may be getting sick of seeing red flags every time you open up Twitter, I’m sorry to tell you that the trend shows no sign of slowing down yet. Twitter data has shown that between October 10th and 13th, the app saw a 21% increase in the red flag emoji usage, and a whopping 1.5 million tweets during this time. Anyone for a green flag emoji?

Just some of the funniest red flag tweets…

Disney Already Has a Cruella Sequel in the Works