Oh, and you also need to find the time to cook your partner a special meal. Think I’m joking? I wish. The NHS have apologised after guidance published on their Start4Life website advised that the 22-week mark in pregnancy “could be a good week to make a fuss of your partner.”

The now (thankfully) deleted advice read, “Partners can get a bit overlooked sometimes – to be fair, they’re not lugging a baby around in their belly, but they may be feeling nervous and not sure how they fit into the picture. Could you try cooking them a special meal?”

Being pregnant is hard work. OK, admittedly I don’t have first-hand experience of being pregnant BUT I have it on good authority that growing a human inside your body for nine months is no mean feat. As well as grappling with the existential euphoria/fear of bringing a baby into the world, you have to deal with logistics (bulk buy ALL the nappies); care for your mental health; and, in many cases, arrange maternity leave.

A later page in the document suggested that pregnant women ‘get help with chores from their partner’. Almost as if it’s the default that women will be doing chores, even when they’re pregnant. 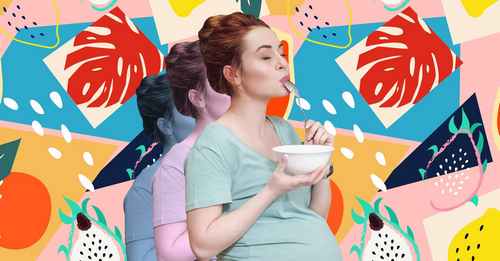 Joeli Brearley – who created the maternity discrimination group Pregnant Then Screwed – said (via Metro), “The guideline that pregnant women with pelvic floor pain should get ‘help’ from their partner suggests that the housework is a woman’s responsibility.

“Yes, we know that women do 60% more of the domestic labour (including almost three times the caring) so it is likely that most women will have to ask for help, but phrasing it this way only entrenches & perpetuates that gender stereotype, thereby ensuring women continue to do the lion’s share of the housework.”

Joeli continued, “If your partner feels “overlooked” because you’re pregnant, then they might want to consider paying for their own counselling.”

On Monday 15 September, a spokesman for Public Health England, which was responsible for the guide, said, “This wording is out-of-date and has now been changed. We recognise it is not appropriate and we apologise. We would encourage all pregnant women to seek help if they need it both physically and emotionally.”

While it’s great to see that the advice has been removed, there’s still the problem of how it was allowed to be published in the first place. It’s clear that pregnant women, and people of all genders who can get pregnant, are still not being taken seriously enough about their experiences. The sexist language may have been removed, but the sexist rhetoric surrounding pregnancy remains. For more information on how you can support pregnant people, we recommend checking out Pregnant Then Screwed.