Just four months after the initial sexual misconduct allegations against Harvey Weinstein were first published in the New York Times, the Golden Globes took place in a very different Hollywood than the one that existed a year, or even six months, ago.

After months of disturbing revelations about the actions of men not just in Hollywood but in politics, the media, and elsewhere, actresses donned black gowns to raise awareness for Time’s Up, an initiative spearheaded by A-listers like Reese Witherspoon, Eva Longoria, and Kerry Washington, which seeks to bring equality not just to the entertainment industry, but to other, less visible fields inhabited largely by women of color and lower-paid workers as well.

The night was full of moments that ranged from quietly subversive to incredibly moving, and below are a few of our favorites.

Oprah Winfrey brought the house down with her acceptance speech for the Cecil B. DeMille Award, during which she recounted watching Sidney Poitier (another DeMille award winner) take home an Academy Award and referenced Recy Taylor, a black woman who was gang-raped in 1944 by six white men who were never brought to justice. 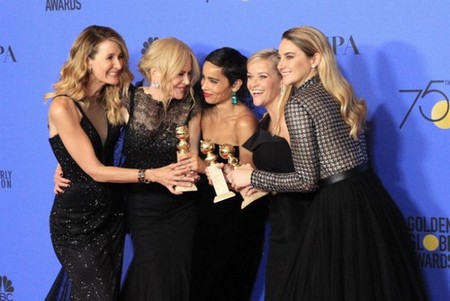 As the first black woman to win the prestigious award, she told the audience: “I want all the girls watching here, now, to know that a new day is on the horizon! And when that new day finally dawns, it will be because of a lot of magnificent women, many of whom are right here in this room tonight, and some pretty phenomenal men, fighting hard to make sure that they become the leaders who take us to the time when nobody ever has to say ‘Me too’ again.”

Debra Messing calling out E! … while being interviewed by E!

While being interviewed by E!’s Giuliana Rancic, Messing called out the network for a recent controversy with host Catt Sadler, who left after learning that co-host Jason Kennedy was earning double what she was. “I was so shocked to hear that E! doesn’t believe in paying their female cohost the same as their male cohost,” Messing told Rancic. “I miss Catt Sadler. So we stand with her. And that’s something that can change tomorrow. We want people to start having this conversation that women are just as valuable as men.”

Portman, alongside Ron Howard, presented the award for Best Director, a category for which women are rarely nominated. Indeed, this year’s roster featured zero women, a fact Portman not-so-subtly pointed out when she announced the “ALL MALE nominees.” Savage doesn’t even begin to describe.

Barbra Streisand on being the only woman to win Best Director

Believe it or not, there’s only been one woman ever to win the category, and that’s Barbra Streisand for Yentl. “You know, that was 1984,” Streisand said incredulously. “That was 34 years ago. Folks, Time’s Up! We need more women directors and more women to be nominated for Best Director. There are so many films out there that are so good, directed by women.”

Laura Dern’s sensational #GoldenGlobes speech bears repeating: “I urge all of us to not only support survivors and bystanders who are brave enough to tell their truth, but to promote restorative justice.” pic.LL2kKkBMHw
– Jarett Wieselman (@JarettSays) January 8, 2018

Laura Dern won Best Supporting Actress for her work on Big Little Lies, the beloved HBO series produced by and starring Witherspoon and Nicole Kidman. An outspoken proponent of Time’s Up, she told the audience: “Many of us were taught not to tattle. It was a culture of silencing and that was normalized. I urge all of us to not only support survivors and bystanders who are brave enough to tell their truth, but to promote restorative justice … May we teach our children that speaking out without the fear of retribution is our culture’s new north star.”

Eva and Reese, two of the loudest voices behind Time’s Up, walked the red carpet together in black to talk about the importance of the movement (which, Longoria clarified, is not merely a “moment”), demand an end to gender inequality, and, like Messing, call out E!’s unfair treatment of Catt Sadler. An iconic duo if we’ve ever seen one.

I love that every time Seacrest tried to talk about Michelle Williams’ #GoldenGlobes nom, she kept turning it back to Tarana Burke, her date who started the #MeToo movement. Then she said this: pic.8dUBEoS5BZ

Williams invited activist Tarana Burke, founder of the #MeToo movement, as her date to the event – an important reminder not to forget the trailblazers who laid much of the groundwork for the initiatives famous women are now helping to promote. “I thought I would have to raise my daughter to learn how to protect herself in a dangerous world, but I think the work that Tarana has done and the work that I’m learning how to do – we actually have the opportunity to hand our children a different world,” Williams told E!. “I am honored beyond measure to be standing next to this woman. I have tears in my eyes and smile on my face.”

The Must-See Looks From The Screen Actors Guild Awards