Fear is a steady presence in many of our lives. For the most part it’s an undercurrent, which ripples to the surface when we’re catcalled; when we feel our bodies being judged by strangers; when we’re on an empty tube and a man chooses to sit down right next to us; and all manner of anxiety-inducing situations, in which the power dynamic between men and women becomes all too real.

Following the news that Wayne Couzens used his position as a serving police officer to kidnap, rape, and murder Sarah Everard, our fear is no longer just an unwelcome companion. It has consumed us. And who do we turn to when we are scared?

On the same day that Couzens received a whole life sentence, a tribunal found that the Metropolitan Police had violated Kate Wilson’s human rights in five different ways, after she was deceived into a long-term, intimate relationship by an undercover officer in 2003.

i News then reported that 771 Met police officers and staff have faced sexual misconduct allegations in the past 11 years, with only 83 of them being sacked. 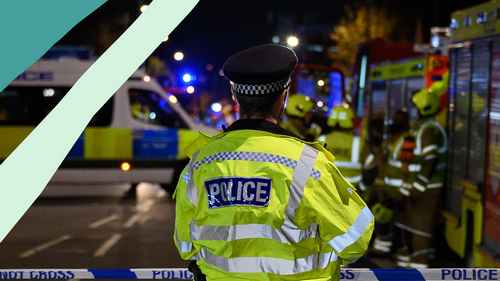 This comes after Met Police officers have been charged with misconduct after taking selfies at the murder scene of Nicole Smallman and Bibaa Henry; after six Met Police officers were dismissed for abusing stop-and-search powers; and after a parliamentary enquiry found that the Police breached ‘fundamental rights’ at the vigil for Sarah Everard earlier this year. I could go on, and on.

These cases have struck an irreparable blow in many women’s trust of the police. It must also be pointed out that distrust in the police has long been present within marginalised communities.

Black people are disproportionately impacted by stop-and searches, while the Sex Worker Advocacy and Resistance Movement has pointed out that, “Increased policing has been shown time and again to result in sex workers being less safe, not more safe.”

Following Wayne Couzens’s sentencing, the Metropolitan Police Commissioner Cressida Dick gave a statement, in which she said, “I am absolutely horrified that this man used his position of trust to deceive and coerce Sarah and I know you all are too. What he did was unthinkable and appalling.”

She continued: “He has very considerably added to the sense of insecurity that many have in our cities, perhaps particularly women. I am absolutely sickened… this man has brought shame on the Met. We have been rocked.”

The Metropolitan Police then issued a statement, outlining the measures they will be taking to “protect women and girls”, which included, “deploying 650 new officers into busy public places, including those where women and girls often lack confidence that they are safe.”

I truly don’t understand how this is meant to reassure women, given that Sarah was arrested by a serving police officer in public place, and in front of witnesses.

If the Met are ever to restore a glimmer of public trust, they must do better than empty promises and victim-blaming advice.

The statement also included the truly baffling advice for what to do if “you have concerns an officer is threat to you,” which suggested asking the police officer questions, seeking “independent verification” of what they say, and – if that fails and you feel like you’re in “real and imminent danger”,  then you “must seek assistance – shouting out to a passer-by, running into a house, knocking on a door, waving a bus down or if you are in the position to do so calling 999.”

This advice is all well and good if you are dealing with a police officer who doesn’t intend to harm you but, as in Sarah’s case, is entirely useless if you are faced with one who does. As well as putting the onus on vulnerable people to verify whether the police officer is a danger to them, it also shifts blame from the Police, who should be undergoing a serious process of self-reflection and institutional reform to ensure we don’t have to be afraid of them.

The advice, which effectively amounts to ‘running away’ is also extremely insulting given the fact that many who’ve attempted to resist arrest have ended up with serious injuries. In September this year, the Met referred itself to the Independent Office for Police Conduct after a 70-year-old man – who was stopped over a broken brake light – sustained a head injury and a swollen eye while being detained.

If the Met are ever to restore a glimmer of public trust, they must do better than empty promises and victim-blaming advice. They must stop centring their hurt feelings about public distrust and start recognising their culpability in creating an unsafe environment for marginalised communities.

Dear Reader, We Present You With Regé-Jean Page and Emily Brown at the GQ Awards