Some flatmates may be beloved friends, others may be strangers you met on spareroom.com who you’ve never really had to spend that much time with – not when there were bars and offices to go to.

But now – confined within the four walls of your flat, you may start to notice just how passive aggressive Jeff’s tone is, and how much Lisa leaves her plates – literally ALL her plates, what is she, hoarding plates??? -in the sink. Can she not use a dishwasher???

However stressful and sad lockdown can be, it’s made infinitely worse if you happen to be living with someone you loathe or, even just someone who is sloppy, irritating, moody or awkward.

Welcome to flatmates from hell: the Covid19 edition.

Jenny, 24, a marketer from Bristol, tells of an actual physical fight – Kardashians Season 18 style, that erupted with her flatmate just days before lockdown started.

“A lot of tension had been building up over months and we just snapped,” she says, “Neither of us are violent people, but the situation was obviously just not working at all.”

A few days into what was looking like the long haul of lockdown, and facing what could be months with a woman who had just literally punched her in the face, Jenny moved back in with her parents.

“I just couldn’t face it. I’m still paying rent, and that’s hard, but it’s so much better than being there. The atmosphere was toxic.” 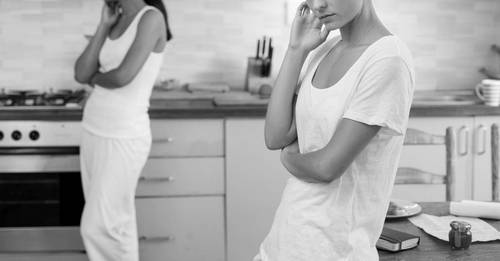 Some people are, however, not so lucky, and are still living in a flatmate nightmare.

“I found my flat mates on SpareRoom last year, after I broke up with my boyfriend and had to move out in a hurry,” says Patricia, a 30 year old consultant living in London, “One of them I get on well with, but the other was normally at her boyfriend’s or was out quite a bit, so I never got to know her that well.”

When the pandemic hit and lockdown happened, the flatmate Patricia was closest to, went to go and live with her family, leaving her with what would soon turn out to be…a flatmate from hell.

“Clearly she is not happy with the situation – none of us are- but she is coming and going between her boyfriend’s flat, and when I pointed out that was not ok, not proper social distancing, that was when it really kicked off. She blocked me on social media and Whatsapp so that I wouldn’t be able to contact her. It also allowed her to disappear and return without scrutiny.”

Clearly Patricia’s flatmate is guilty of more than just being an awful living partner, but a grossly irresponsible social distancer. Yet Patricia, like most people in these unfair and unpleasant situations- is stuck.

“My family do not live in the UK, so it’s not like I can just run home, I’m trapped with her,” she says, “And her day-to-day behaviour is intolerable. She takes baths and leaves them full without draining them. She leaves all her dishes in the sink, her part of the vacuuming is never done. Clothes have started to just weirdly go missing and then reappear. She has even started cooking foods I’m allergic to. But I have basically just started cleaning up after her and shutting up about it, as it’s not worth the drama in such an enclosed space.”

Patricia has tried to approach her flatmate, but the results have been utterly unhelpful.

“Oh, we’ve had everything from spats and passive aggressive comments to exploding territorial behaviour being blamed on the “outbreak stress” but that is never apologised for,” she says, “I just avoid her now, as I can’t cope with her screaming at me while we’re stuck together.”

Daren DeWit is a qualified trainer with, and senior London representative of the Centre for Nonviolent Communication, and has a lot of advice for anyone struggling to communicate in a hostile living situation.

“Culturally, we are taught to judge, blame and criticise each other when we are in conflict,” he says, “With these approaches- you tend to upset the person and get a reaction. They feel that sense of being attacked, tensions deepen, they don’t like the way they are being viewed and spoken about and so often they will react in a similar way and you can end up with an escalation of the conflict.

I also think that, when we judge and blame others, it actually fuels our own anger because we have a sense that they deserve our anger- that it is their fault, that they are selfish- we feel justified.”

Instead, Daren suggests we reframe the way we approach conflicts like these completely.

“Don’t be tempted to get into a game of who is right and who is wrong, who is the good guy and who is the bad guy…it should be what are your needs and what are mine,” he says, “We then need to make a really important distinction between needs and the strategies to meet these needs. I need you to put all the dishes away when you finish your meal- that is a strategy not a need. The need is to have clear space to do your own cooking- or some other reason. Distinguishing between them is very important. Our needs are essential, but our strategies can be flexible. If we can connect around the needs that each of us have in an empathic way – then we can be looking at how we meet our needs together and what is each of us willing to do to meet these needs.”

Tracee, 28, is a lawyer from Manchester, who is living with her boyfriend and three other friends in a house share. Up until lockdown, the living situation had been pleasant. But once the pandemic hit, it took an unexpected turn for the worse.

“We had always suspected one of our housemates, who is a long-standing friend from uni, drank a bit too much, but we never really knew how much because she was normally out,” she says, “ By day three, she was a few bottles down and started having a very loud phone conversation at 3am. When I came down to ask her to be quiet she was incredibly verbally abusive.”

Tracee says the behaviour has escalated as lockdown continues.

“Sometimes she is truly lovely, but her moods have become really erratic,” she says, “Whenever she is asked to stop doing something disruptive, like having party Zooms or group house parties really loudly in communal spaces, she lashes out. It can be delayed reactions, or disproportionate ones too- like the other day she announced to the whole house that I was a bitch and wasn’t allowed any of the food she had cooked because I emptied her damp clothes out of the washing machine after she had passed out and forgotten them.”

Simone Bose, a relationship counsellor at Relate, thinks a lot of these tensions can be allayed by setting new, updated, lockdown-appropriate house rules.

“It’s important to know that this isn’t a normal situation, so people will react in different ways, therefore you should have a conversation and hear each other out on what your needs would be at this time,” she says, “One person may need more normality and one may need to feel they are in more control. How you spend the day and use the space in the house should also be looked at. Is there shared time together and how is time spent apart where space is needed? Something that may trigger someone’s irritation is when they aren’t getting the space they need, so work out ways to give that in different rooms, especially for work. For better tolerance and to help reduce irritation, know yourself better and what helps to centre you and calm you in situations of anxiety and stress.”

There is also, of course, the issue of Tracee’s flatmate’s perhaps over-dependence on alcohol.

“It’s what has held us back from confronting her head on,” she says, “We suspect she may have a real problem and we want to be sensitive to that.”

Simone believes in opening channels of communication that do not necessarily have to touch upon the issue of her suspected addiction. Instead, focus on any behaviour that has proven problematic.

“If something is bothering you, it’s important to talk about it and ask the other person questions also about their feelings on it. When you do express yourself it’s important to speak with “I feel” language, or “I think I need”rather than using accusatory language,” she advises, “If a fight does happen, let yourself calm down from the adrenaline of the fight and write down or thing through what it is that actually is bothering you, what is it about you that was so triggered, are there are other things in your life bothering you that are giving your a lower tolerance level for things that are making you snap? Think about the other person and their situation, with empathy. Go back to talking to them with the non blaming language, and explain to them why you feel that way, is there a compromise to the situation, ask them again what their feelings are on this too, so they feel they are heard also.”

Daren agrees that the best tool you can employ is empathy.

“If she does approach her about her drinking, she needs to make it as empathic as possible- and do it all in a very non judgemental way. This can be very challenging though, as someone’s patterns- particularly around drinking- can be very entrenched and hard to shift. These are obviously bigger issues that will need more extensive help- like therapy.”

Yet what all flatmates living in what can often feel like an impossible living situation should remember, is that there is a mutual empathy to be found in the fact we are all living through a truly terrible time.

None of us like being cooped up, or panicked about loved ones, or work, money or the future. Try and find a spirit of togetherness in a time of crisis and remember that the enemy is out there, and not in your communal kitchen.

And until lockdown eases up? Good luck.

Here’s how to throw the ultimate virtual hen party

Here are the best grocery delivery services to try