The campaign, which runs from 16 to 30 November, calls for social media users to take a stand to online harassment they encounter on any platform, supporting the person attacked by turning the hate ‘into something empowering’ rather than staying silent, via the hashtag #IDontSpeakHater.

The Kering foundation has launched a new digital campaign for its annual White Ribbon For Women initiative to combat gender-based cyberbullying amongst young people, an issue that affects one in four young people with 75% of girls and women reporting online abuse worldwide.

While making threats online is becoming a criminal offence, internet anonymity means online bullying has become a huge global issue. It can happen 24 hours a day, seven days a week and, as everyone knows, things can go viral and escalate very fast. 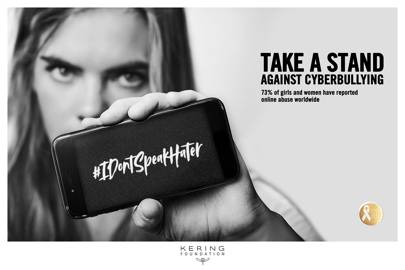 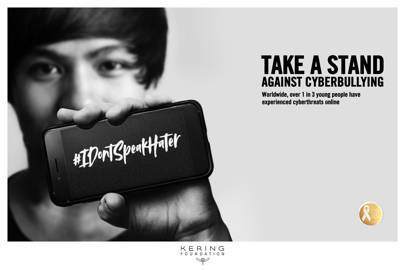 Anyone who’s been a victim will know that the consequences of online abuse are no different from those of bullying in real life – stress disorders, trauma, anxiety, sleep problems, depression and physical pain to name just a few.

The campaign is calling on a WhiteRibbonSquad of influencers, comedians and personalities as ambassadors to spread the message to ‘break the chain of hate, fight the pack mentality online and encourage meaningful change in language, mindsets and behaviours’.

The fitness trends you *need* to know this year, including date-ercise and circus workouts