A seven-year-old girl who lost part of her leg to bone cancer has had it reattached backwards so she can dance again.

Amelia Eldred thought her dreams of being a dancer were over when she was diagnosed with an osteosarcoma in her left femur.

She underwent three five-week sessions of gruelling chemotherapy, then surgery to amputate the affected limb.

Amelia’s hobbies include swimming, athletics, running and bike riding – and she has vowed that one day she will dance on stage once more.

So far the youngster has amazed doctors with her rapid adaptation to losing her leg – and fundraisers have rallied round to help her achieve her dream. 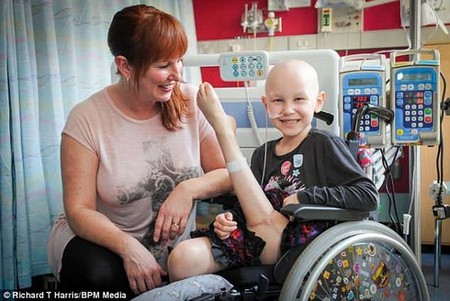 Amelia, pictured with mum Michelle, was diagnosed with osteosarcoma in August last year and had to have 15 weeks of chemotherapy plus an operation to amputate her left leg

Surgery to remove the tumour was carried out at the Royal Orthopaedic Hospital using a rare procedure called rotationplasty where Amelia’s leg was amputated high up her thigh, then the lower leg reattached the wrong way around, meaning that her ankle will eventually work as a knee joint, with her foot slipping in to a prosthetic.

Her mother Michelle Eldred, from Tamworth, Staffordshire, said: ‘Amelia has now started another cycle of chemo and has one more cycle to go, plus day clinic treatment till the end of the year.

‘Following her surgery she is healing very well and amazing the doctors with how quickly she is moving the adapted leg and foot.’

Amelia became ill in the first week of the school summer holidays last year while attending a playscheme, when her leg ‘gave way’ beneath her and began to swell.

Her parents Mrs Eldred and Richard tried putting cold compresses on it, but the swelling remained.

Staff at the Robert Peel said they thought she had burst a blood vessel, but a week later, the swelling remained. 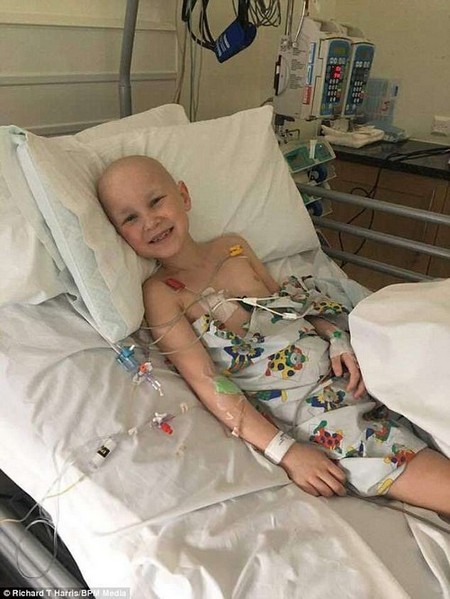 After Amelia’s surgery, one of the nurses overheard her say to another child: ‘there’s nothing wrong with being different!’ 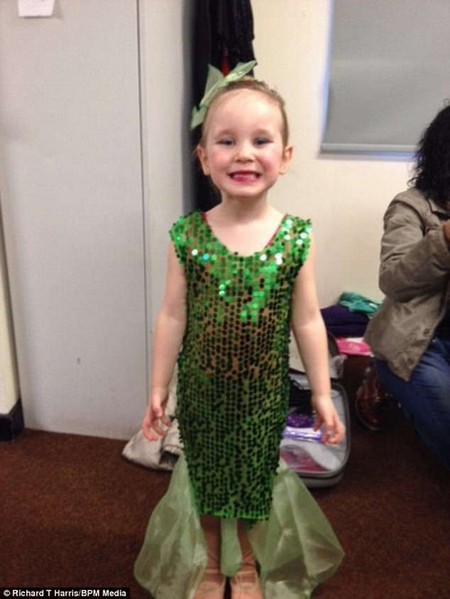 Mrs Eldred said: ‘We took her back to the Robert Peel. They x-rayed her and we were sent straight to the Birmingham Children’s Hospital A and E where they confirmed she had a 10cm tumour on her femur, which had actually fractured the bone.

‘I called my husband Richard and when they took us into a room with comfy chairs and tissues, I knew it was bad news.

‘After that it was MRIs and other scans.’

On Amelia’s seventh birthday last August, a biopsy revealed that it was an aggressive high grade tumour, which had not shrunk after two rounds of chemotherapy.

Amelia and her parents were told that her leg would need to be amputated. The surgery was carried out in January and a recent scan has shown that the bones are fusing together well.

In around three months’ time, Amelia will be able to put weight on her leg and have a prosthesis fitted, but an NHS prosthesis is not a practical solution for a lively girl like Amelia to do all the activities she loves so much. 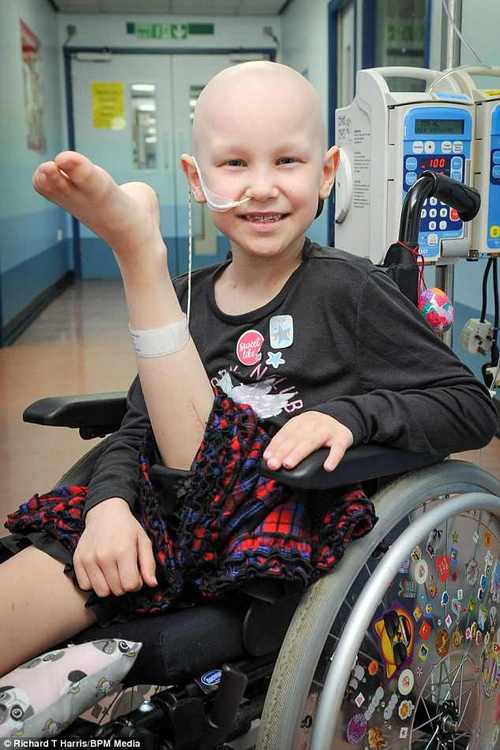 Amelia will be able to put weight on her leg and have a prosthesis fitted in around three months’ time, and parishioners at Kingsbury Methodist Church hope to raise around £30,000 to ensure that she can have specially-made blades

The Eldred family live in Kingsbury and parishioners at Kingsbury Methodist Church are among those who have started fundraising for her.

They hope to raise around £30,000 to ensure that Amelia can have specially-made ‘blades’, like those used by Jonny Peacock on Strictly Come Dancing, one of Amelia’s favourite shows. 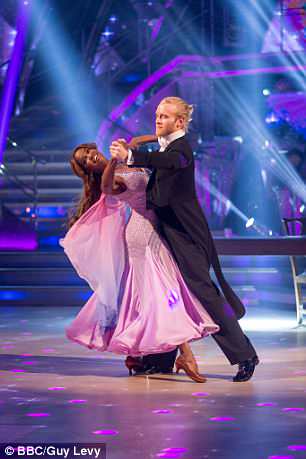 Paralympic gold medallist Jonnie Peacock, who was a fan favourite in Strictly Come Dancing, lost his leg to meningitis when he was five and uses a prosthesis

‘In addition she loves riding her bike and running! She dreams one day to return to dancing and perform on a stage. She was looking to join a new gymnastics club in Tamworth, before her diagnosis.

‘I do believe that Amelia will aspire to her dreams. She is very determined and everyone that knows her and has met her at both the Orthopaedic and Birmingham Children’s Hospital are amazed by her courage and positivity through her journey so far.

‘She talks of how her new leg will enable her to travel the world one day and maybe even enter the Paralympics!

‘People ask how we cope, but we take our lead from Amelia, she has been so positive about all this. She has been so brave through all this – just before her surgery she waved to her leg and said ‘bye, bye tumour, see you loser!’ 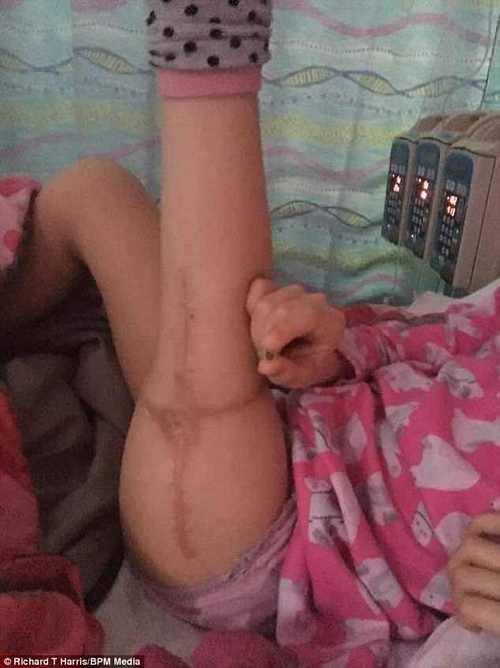 Surgeons at the Royal Orthopaedic Hospital used a rare procedure called rotationplasty in which Amelia’s leg was amputated high up her thigh, then the lower leg reattached the wrong way around, allowing the ankle to function as a knee

After her surgery, one of the nurses overheard her say to another child: ‘there’s nothing wrong with being different!’

‘We’ve tried to keep everything as normal as possible, so daddy still goes to work, mummy works from hospital when she’s in here and Amelia goes to school when she is able to.’

Or send a cheque to 14, Tamworth Road, Kingsbury, B782LD. Cheques should be made payable to Kingsbury Methodist Church ‘Amelia’s Fund’.

Osteosarcoma is a rare type of sarcoma of the bone and is also called osteogenic sarcoma.

The most common type of bone cancer, it is found in growing bones and is usually diagnosed in teenagers and young adults.

It is slightly more common in men than women.

They are rare, with only around 530 new cases each year in the UK

It can affect any bone in the body but is most common in the arms and legs.

The cause of the cancer is unknown but it is thought to be related to rapid bone growth, such as adolescence.

Adults who have a bone condition known as Paget’s disease or who have been exposed to previous radiotherapy may have a slightly increased risk of developing bone cancer.

Rarely, some bone cancers may occur in people from families where there is an inherited faulty gene that increases the risk of developing several types of cancer (Li-Fraumeni syndrome).

The most common symptom is pain, but the tumour can also cause swelling and tenderness.

It is sometimes diagnosed when a bone weakened by the cancer breaks during a minor accident.

Sometimes it is discovered when a bone that has been weakened by cancer breaks after a minor fall or accident.

Osteosarcomas are treated by a combination of surgery, chemotherapy and radiotherapy.

Surgery is a very important part of treatment and is used to remove the tumour in the bone.