Yep, look closely at the ripples of water. We were too fixated on the creepy Ring-esque girl fully clothed standing in water to notice the tons of creepy floating faces staring back at us.

Even the promotional poster for this new series is enough to give us nightmares.

In terms of plot, all we know is that the new season will have no connection to the first. We’ll be met with new characters, a new storyline and, of course, a different big ol’ creepy house, and it’s based on the 1898 horror novella The Turn of the Screw by Henry James. The story follows a young governess who is sent to Bly House, Essex, to look after two children Flora and Miles whose parents have just died – but she soon starts noticing people creeping around the house, which only she can see…

Horror fans, we have fantastic news. Remember when The Haunting of Hill House dropped on Netflix and scarred the absolute crap out of everyone? Well, the sequel to the hit supernatural series has been announced, and it’s arriving pretty damn soon. 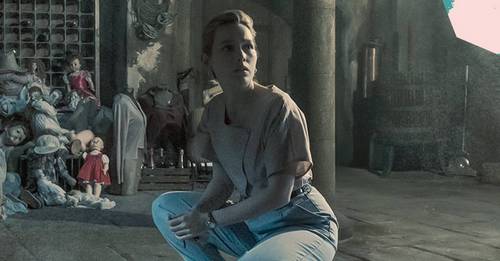 Netflix took to Twitter to share the first-look poster with the caption: “The Haunting of Bly Manor arrives this fall. Until then… look beneath the surface.”

While we don’t have an exact release date, autumn certainly isn’t that far away, so it’s safe to say we can start getting excited. Director Mike Flanagan revealed on CinemaBlend’s ReelBlend podcast last month that the pandemic didn’t delay the show’s release.

“I don’t expect it to be delayed one bit. We didn’t really miss a step, believe it or not. We had already wrapped before the whole Covid shutdown hit all the productions,” he said.

“I think Netflix, they haven’t announced when it’s coming out. They’ve got their own plan. But we’ve been jamming through post. It’s been going great. It’s definitely later this year. It’s not going to get kicked off into 2021, or anything. Everything’s on schedule. I’m really excited for you guys to see it.”

These $15 Running Shorts Have Thousands of 5-Star Reviews, So I Had to Try Them

Should I publicly display my pronouns?