If you thought June was finally in the clear in season two of The Handmaid’s Tale, think again. After the third episode’s brutal twist ending, which sees June brutally recaptured by Gilead’s forces just as the plane she’s in is about to take off for Canada, the fourth episode finds her back in both Aunt Lydia’s and the Waterfords’ clutches. Let’s get to it, shall we?

1. June’s Return to the Red Center

Freedom was so close for June, but not anymore. The heroine is chained to a bed in the Red Center, going out of her mind with boredom and supervised by an Aunt at all times.

Aunt Lydia congratulates “Offred” for eating well, and June’s response makes it clear that her spirit hasn’t been broken: “It’s June. You know my f*cking name.”

Naturally this pisses Aunt Lydia off, and she goes on to present June with two options: either stay chained up there until she gives birth to the baby (after which she’ll be executed), or go back to the Waterfords’ home; June begrudgingly picks the later.

2. A Tense Reunion With Serena Joy

Once she goes back to Serena and The Commander, June discovers that they’re covering up her absence by telling people she was kidnapped by rebels. That doesn’t mean all is forgiven, however. Serena later follows June up to her bedroom and proceeds to strangle her for retaliation for the escape, furious that June has been gone for “92 days.”

She lets her neck go just in time for June to catch her breath, and she says, “Serena remember, as long as my baby is safe, so is yours.” The line is no doubt a reference to Hannah, who Serena let June briefly get a glimpse of in season one.

3. The Letters and an Update on Mayday

In the season one finale, June gives Rita the stack of letters from women who have been victims of Gilead’s regime in hopes that someone from Mayday will retrieve the package and get the letters out into the rest of the world. Unfortunately no one ever came, because Rita gives the letters back to June because she’s worried about getting caught with them.

Later, during Serena Joy’s baby shower, June is able to talk to fellow handmaid Alma about the rebel organization; she tells her that Mayday has gone silent and that the group is reportedly done helping handmaids escape Gilead.

As Serena Joy celebrates her baby shower in her home, the Commander has a shooting getaway with other high-level men in the government. The subject of Canada comes up, and another Commander says Gilead is inching closer to getting them to “ease sanctions.” Canada is, obviously, not down with what Gilead has been doing over the last few years (enslaving women like cattle, stripping them of their rights, ripping families apart. .. wholesome stuff).

But Commander Waterford says he can fix the situation, if only he’d be appointed special envoy. Commander Pryce (the dude who orders Nick to spy on Waterford in season one) doesn’t seem to want to make this happen, and subtly jabs Waterford about his once-missing handmaid.

This week’s flashback is all about Luke and June’s marriage, or rather, how their relationship begins. As you’ll recall, they originally start hooking up while Luke is still married. Though clearly their love is genuine, the affair is frowned upon by quite a few people (June’s mom voices her disapproval in episode three, for instance). Now we get to see what Luke’s wife thought of the whole thing. Surprise, surprise: she’s not thrilled!

Luke’s ex, who he’s been separated from for three months at this point, confronts June after a yoga class and asks her to “back off.” She tells June that she and Luke “made vows before God, and that means something. .. you can’t just wreck people’s lives like they don’t matter.” The diatribe hits home for June, especially after Luke’s ex screams that June is “a f*cking whore” in front of everyone in the parking lot. June later tells Luke about how guilty she suddenly feels (*heavy, judgmental sigh*), and he calms her down by saying that he loves her more than he ever loved his estranged wife (who he also insinuates is a little off her rocker).

Remember the nice truck driver, Omar, who helps shelter June in episode three? The one whose house she stays at, and whose wife and young son she meets? Well, it turns out that Gilead somehow discovered their role in aiding June. Aunt Lydia takes June down by the river for a walk, which is also the place where Gilead hangs its criminals. She stops June in front of a man’s body that’s dangling from a noose, and informs her that it’s Omar (apparently his wife was forced into becoming a handmaid, and their son was given to another family). June completely loses it as Aunt Lydia taunts her over and over again: “Who killed him? Whose fault was it?”

The fourth episode, “Other Women,” might start off with June vowing not to let her deeply unfortunate circumstances break her, but by the end, her immense guilt has ravaged her emotional state. Once she witnesses Omar’s body hanging by the river it’s like all the light and fire within her has been snuffed out. She vows to be the handmaid the Waterfords deserve, begging them for the right to stay (“Please, let me try to be good”). The thing that’s so upsetting is that, for once, she seems to believe the words she’s saying.

By the end of the episode she’s so broken down that she barely acknowledges Nick’s presence. The final scene is of her in something akin to a fugue state, repeating “We’ve been sent good weather” over and over again. Pray for June, you guys. 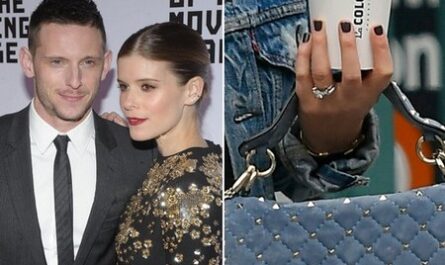 Mindy Kaling and B.J. Novak Aren’t Dating (Anymore), but Their Quotes Are Precious

OMG, Spotify and Hulu Announced a $13-a-Month Bundle Deal – and No, You’re Not Dreaming