Hulu has commissioned the show for yet another series before it’s even released the premiere date of Season 4, which we are keeping everything crossed to come later this year.

Granted, Season 4 of The Handmaid’s Tale hasn’t even arrived on our screens yet but we’re already getting mega-excited that Season 5 has been confirmed.

Last year, filming on Season 4 was delayed just two weeks into production in Canada due to the pandemic but we’re now being warned to ‘hold onto our seats’ for yet drama.

So much Handmaid, give us all the Handmaids. 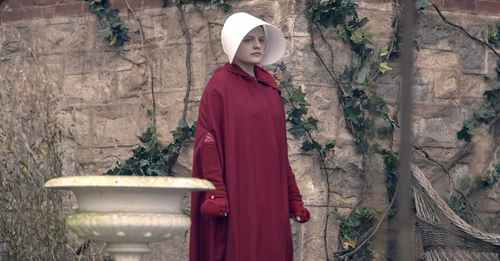 In a special announcement from Handmaid stars including Elisabeth Moss, Alexis Bledel and Joseph Fiennes, the cast said they were ‘thrilled‘ to bring back the show for a fifth time with June Osborne actress Elisabeth saying it was her ‘privilege and honour’ to continue to tell the story.

Who will be starring in season 5?

As far as the cast goes, the latest announcement may give us a hint as to the stars that are sticking around for two more series.

The announcement reads: “✨The cast has a special message for you ✨Season 4 returns in 2021 …oh and praise be, we’ve also been renewed for Season 5!”

One thing we can feel sure about is that Elisabeth will continue to spearhead the show because without June, there is no Handmaid’s Tale to tell.

Showrunner Bruce Miller previously told Vanity Fair: “This story only exists as long as June was alive to live it and write it down. So I think that June is our guide. When June dies, our guide dies, and our show dies.”

What will happen in season 5 of The Handmaid’s Tale?

When it comes to S5 plot predictions, we may have to wait until Season 4 has aired to know a bit more.

The trailer for the next installment was released in June, which takes us back to the Season 3 finale in which June helped a large group of children and Marthas escape to Canada.

Giving us a glimpse into that night and why June didn’t board the plane, it opens with her being carried away by the Handmaids after she was shot.

The dramatic trailer also shows June and some of the other Handmaids in Martha’s clothes, looking like they’re trying to escape from the Gileadean authorities.

Even though the first season of The Handmaid’s Tale closely followed the storylines of Margaret Atwood’s 1985 classic novel, all subsequent seasons have been created by the show’s directors so it’s clear how faithful the story will remain to the tales.

When will the fifth season be released?

The Season 5 release date is even more of a mystery since we’re yet to get firm answers about our 2021 fix.

Every year since the show launched in 2017, there has been a new season of The Handmaid’s Tale. However, 2020 was the exception due to setbacks with filming.

One thing’s for sure, the promise of two more seasons has given us something to look forward to.