Frozen fans, the day has finally come! The first trailer for Frozen 2 has arrived and jeez, is it just us or does it looks pretty dark compared to the first?

The teaser trailer, released today by Disney, sees Princess Elsa running furiously into the sea using her powers to walk on ice.

However, any vision of heroic triumph are quite literally shattered when she suddenly plunges under the water, as her ice cracks and waves crash over her, hinting to Disney fans that Frozen 2 isn’t going to be as merry as the original. Arendelle all looks quite sombre, with Kristoff picturing riding into a deadly battle and Anna using a sword for defence.

There are no chirpy sing-along songs here either. But we do know that the original cast are back – Elsa (Idina Menzel), Anna (Kristen Bell), Kristoff (Jonathan Groff), Olaf (Josh Gad) and Sven voice the characters they did for the first film. 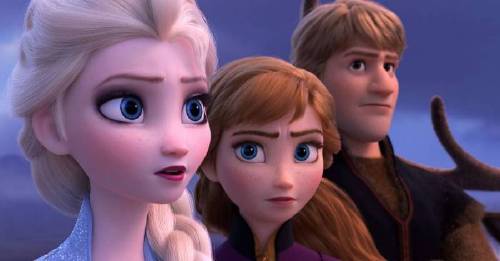 And we hear that Evan Rachel Wood and Sterling K Brown have joined the voice cast too.

We don’t know much more about the plot other than we can see from this trailer but we reckon it’s set to be a hit. Frozen turned out to be the highest grossing animated film of all time. ALL TIME. It actually won two Oscars (for Best Animated Feature and Best Original Song – yep, you guessed it, for Let It Go).

Frozen 2 is released on 22 November.

Harry Styles has inspired, a new fanfiction film, and we *need* to know more

Taylor Schilling Is Just, as Horrified, as You Are About, The Prodigy’s Dog Scene