Couples are inundated with advice on what to do and not to do to conceive, but perhaps the easiest change is one in diet.

According to a review published in the American Journal of Obstetrics and Gynecology by Harvard University, there can be a connection between what women eat and their chances of getting pregnant.

And there are even certain foods that men can eat to increase their semen quality.

Dr Jose Chavarro, one of the main authors of the study, told Daily Mail Online that there has been an explosion in literature on diet and fertility over the last 10 years.

The research is often contentious, with many not believing that diet has any links to the chances of conceiving.

‘Up until recently, the only studies that received the most widespread attention on nutrition and fertility were related to alcohol and caffeine,’ he said.

‘Now more and more studies are coming out on other foods and their possible link. The field is moving a lot and conclusions are always changing.’

Daily Mail Online has reviewed the research and found five foods to eat – and three to avoid – to boost fertility and get pregnant naturally.

Salmon is high in omega-3 fatty acids, which have been proven to direct blood flow to the reproductive organs.

DHA, a member of the omega-3 family, has been found in high concentrations in sperm, showing that the molecules are important in promoting sperm cell viability.

Lyssie Lakatos and Tammy Lakatos Shames of the Nutrition Twins also added that DHA is great for prenatal care and proven vital for infant brain and eye development.

Substitutes for salmon include nuts and seeds, eggs and lentils. 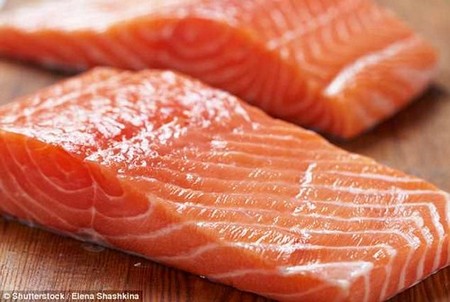 Salmon is high in omega-3 fatty acids, which have been proven to direct blood flow to the reproductive organs as well as increase cervical mucus and promote ovulation

The dark leafy green is high in folate, a B vitamin that has been shown to increase the rate and reliability of ovulation.

Folic acid also helps with cell division and DNA production, both of which contribute to a healthy pregnancy.

Additionally, spinach contains many nutrients important for prenatal care such as iron and calcium. They can also help against brain and spine birth defects, which can develop in the first few weeks of pregnancy

Leafy greens also naturally increase a woman’s libido because they contain chlorophyll, a pigment which helps to increase blood flow.

If you don’t like spinach, you can substitute romaine lettuce, swiss chard or arugula. 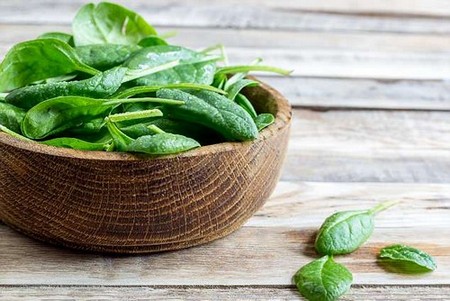 Spinach is high in folate, a B vitamin that has been shown to increase the rate and reliability of ovulation

Whole grains contain B vitamins, such as B9 (folic acid) and B12, which are essential for healthy fertility. A deficiency in B12 particularly has been linked to infertility in several studies.

Antioxidants are found in whole grains and protect the cells which make up the ovum (egg) and organs that produce reproductive hormones from free radical damage.

Some good foods to eat include brown rice, oatmeal, and barley. 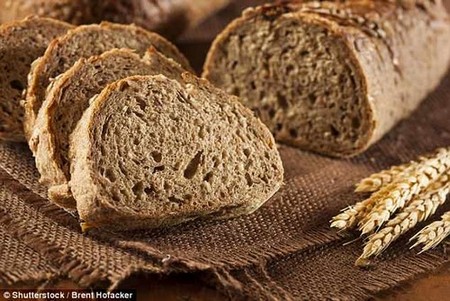 Whole grains contain B vitamins, such as B9 (folic acid) and B12, which are essential for healthy fertility

Beans have been linked to fertility due to being rich in folate, high in fiber and a good source of protein.

A study conducted by the Harvard School of Public Health studied more than 17,500 female nurses without any history of infertility as they tried to become pregnant.

The researchers found that infertility was 39 percent more likely in women with the highest intake of animal protein. But women who ate more plant-based protein such as found in beans were less likely to have trouble conceiving.

The Nutrition Twins also added that beans are full of iron which is vital for avoiding anemia while trying to get pregnant. 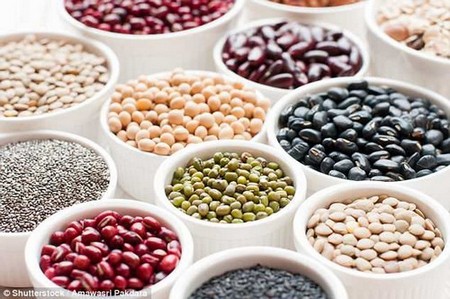 Beans have been linked to fertility due to being rich in folate, high in fiber and a good source of protein

Dark chocolate has been proven in several studies to increase the semen quality in men.

The sweet contains an amino acid, L-arginine, that has been proven to increase sperm count, sperm motility and semen volume.

It’s also high in antioxidants, which are help fight free radicals found in pollution and toxins that are linked to male infertility, as well as increase heart health.

‘The antioxidants are also important for good blood flow, which is great for fertility,’ said Tammy of the Nutrition Twins.

Blueberries and citrus fruits are other foods high in antioxidants.

Dark chocolate contains an amino acid, L-arginine, that has been proven to increase sperm count, sperm motility and semen volume

Soy-based foods, while helpful for women struggling with fertility because it exerts mild estrogenic effects, could harm male fertility.

Researchers from the Harvard School of Public Health and Harvard Medical School tracked 99 men at the Massachusetts General Hospital Fertility Clinic regarding their consumption of soy foods over the course of three months.

The team found that men who consumed the highest amounts of soy foods had 41 million sperm per milliliter fewer than those who consumed no soy products.

Obstetrician Neils Lauersen told the Daily Beast that ‘while including a few soy-based foods in your diet won’t affect most men, if a man’s sperm count is low, or even low-to-normal, soy foods could tip the estrogen/testosterone balance in the wrong direction and reduce sperm count further.’

Fried foods decrease blood flow to the reproductive organs, which could hurt fertility, as well as clog the arteries.

Researchers at Harvard University found that the more trans fat a woman eats, the greater her risk of fertility problems.

The study of 18,000 women found that for every two percent of additional calories the women ate from trans fats, their risk of infertility increased by 73 percent.

‘You’re trying to prep the body where it will promote the healthiest home for the baby so you want to be eating foods full of vitamins and minerals,’ said Lyssie of the Nutrition Twins.

Fried foods decrease blood flow to the reproductive organs, which could hurt fertility, as well as clog the arteries

A study published in the journal Epidemiology found that drinking one or more full-sugar sodas per day and could decreased your chances of getting pregnant.

The study conducted by the Boston University School of Public Health look at more than 3,800 women between the ages of 21 and 45 and more than 1,000 of their male partneers.

Researchers found that one sugar-sweetened beverage per day was linked to a 20 percent decrease in fertility no matter which partner drank it.

Specifically for women, the decrease was 25 percent and for the male partners the decrease in fecundity was 33 percent.

In a press release, Elizabeth Hatch, professor of epidemiology and lead author of the study stated: ‘We found positive associations between intake of sugar-sweetened beverages and lower fertility, which were consistent even after controlling for many other factors, including obesity, caffeine intake, alcohol, smoking, and overall diet quality.’