An ‘extraordinary’ glue that could fix broken bones in a matter of minutes has been developed by scientists.

Swedish researchers claim it could help millions of patients with osteoporosis, a condition that makes them prone to fractures.

Laboratory trials on rat bones showed the adhesive – much stronger than that used to fix broken teeth – worked in five minutes.

Further studies are needed to confirm it works in humans, but experts at the KTH Royal Institute of Technology in Stockholm are hopeful. 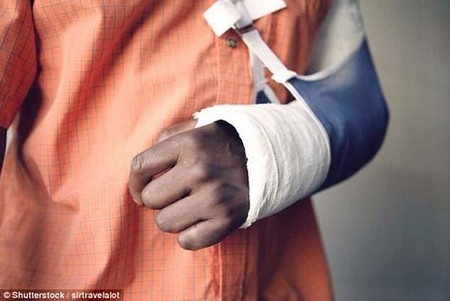 Swedish researchers claim the new glue could help millions of patients with osteoporosis, a condition that makes them prone to fractures

The results of the experiment into using glue to fix the bones of several rats were published in the journal Advanced Functional Materials.

Dentists have used glues to fix broken teeth for years. But, until now, scientists had stumbled across various obstacles in using it to mend bones.

Several glues that showed promise to heal broken bones failed to work and were found to be too weak in an array of studies.

While others have struggled to fixate inside the body or have proven to be toxic or easily rejected by the immune system.

The new adhesive, yet to be named, is 55 per cent stronger than similar ones used already by dentists to fix broken teeth.

Osteoporosis – or thinning of the bones – occurs when the body fails to replace old bone with new. As a result, the skeleton becomes porous and weak.

Although it affects mostly women after the menopause, it can occur in younger women, and in men. One in three women and one in 12 men gets the disease at some time in their lives.

Because most people don’t realise they have it until they break a bone, it is often referred to as a ‘silent epidemic’.

Women have a far greater risk of osteoporosis, partly because of the effects of hormonal changes during the menopause – when oestrogen production, which strengthens bones, drops dramatically – and partly because they have less bone mass to begin with.

And Professor Malkoch argued the Royal Institute of Technology’s creation has none of the other problems encountered previously.

Professor Malkoch said it has the potential to ‘unlock a new era’ of glues used to treat broken bones, MedicalNewsToday reports.

In the trial on rat bones, they put a layer of glue over the bone before adding a small fibre patch. Another lay of glue completes the bond.

Professor Malkoch said: ‘The chemistry, materials, and methodology we used result in extraordinary adhesion and fixation to the wet bone.’

This is ‘incredibly difficult’ in most cases, as the body’s internal environment usually wears down the glue, he added.

Professor Malkoch has now launched a start-up biomedical firm, which hopes to begin scientific trials in the coming months.

He added: ‘We believe that the new findings will lead to a paradigm shift in fracture treatment, which in the future can phase out a large portion of today’s metal plates and screws.’

Around three million people in the UK and around 44 million in the US suffer from osteoporosis, which weakens bones.

Bone naturally takes up to 12 weeks to heal and many people are left in slings, or needing crutches to help them recover.