Earlier this month, Missguided featured ileostomy campaigner and mum-of-one Joy Cooper in their ‘However You Nude’ campaign to encourage their market to ‘rethink the norm’ while US brand Aerie has put Atlanta model Gaylyn (and her stoma bag) at the centre of their lingerie campaign for another year.

Gaylyn recently said: “Censoring my photo or any photo with a life saving medical appliance/surgery undoes the work we have been trying to do to erase the negative stigma of living with an ostomy.”

Having a stoma doesn’t make you inspirational. But being so much more than that is. For the women who tirelessly raise awareness of their health conditions and strive to make social media a kinder place by making it more diverse and accepting, it makes such a difference to the ones who aren’t quite there yet. 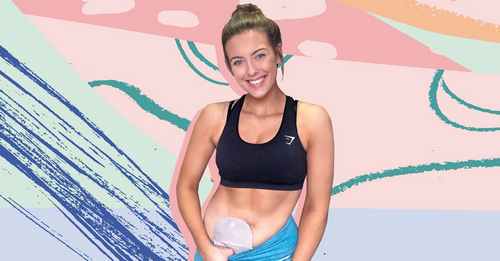 Major campaigns like this have sparked a movement on Instagram for young women determined to break the stigma of stomas and prove that while their conditions, although not always visible, do not define them, either.

Amber has amassed a small army of followers thanks to her podcast, Inside Out, where she talks to other women living with a stoma. It’s been five years since Amber’s operation and the life she left behind (consumed by sleep, medication, hospital admissions and toilet trips) is not one she says she misses.

She says: “Stoma surgery doesn’t always have to mean the end… For some, it can actually mark the start.”

It’s been a big year for 22-year-old Liverpool mamma Joy, who recently joined a diverse collection of models to make ostomy bags visible in Missguided’s latest fashion campaign – and she’s only been on IG for a year. She has had a stoma bag since June because of her ulcerative colitis, which has put her life on pause for the last three years. Now, she’s bouncing back with a new kind of reality.

Leeds lass Laura says she is ‘forever grateful’ for her emergency stoma surgery two years ago. Two days before, she was diagnosed with colitis.

She says: “I have a chronic, invisible illness like many others but we never let it stop us and we will always try to make others aware and knowledgeable.”

Hayley was 22 when she was first fitted with her stoma, affectionately known to her as ‘Sally’. It’s been four years now since Hayley had her colectomy and even though she hates ‘Sal’ most days, she’s grateful for the freedom it’s given her the life she has.

Law student Katie had surgery to remove her large intestine two years ago, when inflammatory bowel disease caused severe toxic megacolon. A rupture could be life-threatening and without her stoma, Katie wouldn’t have lasted the night.

The 20-year-old, who is due to start her second year of uni, says her stoma has given her her life back.

Unlike most people that have a stoma because of Crohn’s Disease or Ulcerative Colitis or Cancer, twenty-three-year-old Charlotte has hypermobility Ehlers Danlos Syndrome (EDS), which is a connective tissue disorder which can affect any part of the body.

Charlotte had her stoma fitted when her colon became essentially paralysed (colonic inertia) as a teenager, which left her on a liquid diet for a whole year. Now, she is raising awareness of EDS while she learns to live with her stoma.

Amy had her stoma surgery in 2011 after Crohns Disease left her living in agony. With over 4,444 Instagram followers (at the time of writing) Amy regularly shares information and tips as well as answering questions about her stoma to help raise awareness of what it means for day-to-day life.