There are many methods of getting rid of unwanted hair. There were times when wax strips seemed a miracle, and Venus razors were the top of depilation perfection.

Now it’s just as everyday as a toothbrush. If a year ago photoepilation seemed a terrible and strange procedure, told all sorts of horrors about her soreness and high cost, today many of her either have already done, or are going to do. The correspondent of SE decided to share her feelings after the three procedures.

Whatever the grandmothers say, in our time from hair on the body you need to get rid of. Simply because their presence is unpleasant to others: we are far from nature, which gave us them for a reason, not just so. In matters of hair removal, there is no democracy, except that the decision to do a complete epilation of intimate places or to be content only with a bikini zone is still left for personal consideration.

Demonstration of overgrown legs and underarms is a serious social crime. Meanwhile, I do not know girls who like depilation, or hair removal. Neither tiresome shaving, from which there is irritation external and internal, no wax (you will not get used to this execution, although you tell all sympathizers that it does not hurt at all), nor a cream with a smell, 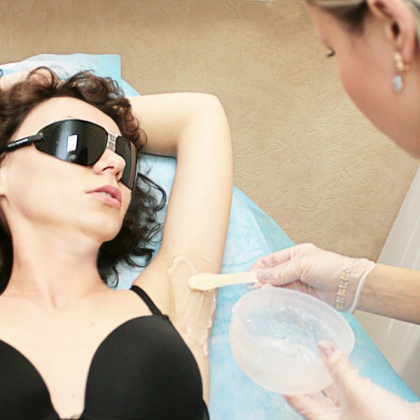 And I do not know a girl who would not want to get rid of not so much from hair as from these procedures forever. Few dared to electro-epilation, although it was known for a long time – too expensive, long and painful. Photoepilation (which acts in a similar way-destroying the bulb, but not every electric discharge, but several light flashes at the same time) was also initially feared, although it took less time and was painful but painful. Stopped and the price – getting rid of hair turned out waybill. However, there was a breakthrough: the pain was removed in a simple way – the burning effect of light on the skin is neutralized with a cooling gel, and as for the price, I chose the salon where the lowest price in the city is 500 rubles (on average in salons from 1200 to 3000 rubles per procedure) . According to the administrator of the “Extreme-style”, this is due to the fact,

Salon masters still predict the future – in the sense that you will get rid of hair permanently. True, not one hundred percent: some annoying specimens will still break through – they need to be plucked. This is written in the information sheet, which they give to sign in the “Extreme-style” before the procedure.

It also indicates that the full effect will come in a year, that on the site of exposure there can be reddening, that the solarium can not be visited either two weeks before the procedures, or a week after their passage. There’s a lot there. Only I’m sorry that this sheet is not given with me, and remembering all the points is quite difficult – so I went to a solarium at an inopportune time. But more on that later.

Deciding to do photoepilation of the armpits, I, embarrassed, let my hair grow there, being sure that you should come with a hair not less than 5 mm in length. “The next time you remove the hair,” – looking at me, said the girl-epilator. It turned out that during hair removal hair does not fall out and do not break off – they remain in place, but only their bulb is destroyed, so it is much easier to remove the lighted hairs than healthy ones, and by all rules they should not get to the surface anymore. They climb those who at the time of irradiation did not grow, but stayed out. Therefore, several procedures should be followed (at least three), until all the hair of the zone receives a dose of light in the desired stage of growth.

The very procedure of photoepilation of armpits passes surprisingly quickly – less than five minutes. You undress, you lie down on the couch, put on your glasses, throw your hands behind your head and watch the transparent cold gel spread over your skin.

Attaching to the skin an apparatus resembling a toy pistol shooting with a laser beam, the master makes a test flash, asking – is it painful for you? When the issue with the threshold of sensitivity is settled, several flashes are made, then the same on the second armpit. Gel is collected, the skin is wiped, you can get up and dress. Before leaving, do not forget to pay and make an appointment for the following procedure – a break between them should be 3 weeks.

After the first procedure, I admit, I did not notice any changes – in two weeks my hair had to be removed, as usual, with wax. After the second visit, the hair grew much smaller, but those that appeared were black and dense – they had to be plucked with tweezers. After the third procedure two weeks later, a few gray weak hairs appeared (I even think that it is not worth using wax to remove them – tweezers are enough). There is a feeling that after the fourth (and I plan on finishing it) and plucking with tweezers will become a rarity. Honestly: I’m happy – another unpleasant moment of life is eliminated.

How to get rid of fat once and for all

Pull-through braids are this summer’s most popular style

Friday Face / Off with Josh Newis-Smith and Rebecca Baio