Most of us follow the ‘bunny ears’ technique whilst some tie their laces by creating a square knot with opposite hands, but which one is the most secure?

Well, according to this tutorial by American entertainment account ‘attn’, the ‘proper’ technique involves crossing the left lace over the right, making a loop on the right side and then crossing the left around that loop and pulling it through. Say what? Here’s exactly how to tie shoe laces…

Just like brushing our teeth and learning to ride a bike, how to tie shoelaces is one of the first lessons we’re taught in life. 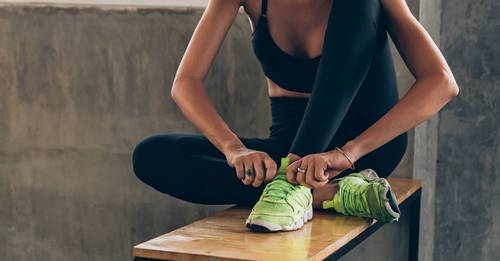 As children, we spend hours trying and trying over and over again to perfect the art of the perfect bow – but it seems that plenty of us have actually been getting it wrong our entire life.

Everything we thought we knew has been questioned by the hack gurus over on TikTok – the platform that’s packed with tutorials, tips and tricks for living your best life.

The video also cites a study from 2017 which proves that the bunny ears technique comes untied after just 15 minutes. Literally my whole life has been a lie.

And another study from the Royal Society of Mathematical, Physical and Engineering Sciences backs this theory up. The researchers found that the strongest and most secure type of tying technique is a ‘square knot’, with two trefoil knots. In layman’s terms, this involves joining two loose ends together in a knotted loop using opposite hands.

The internet was left dumfounded after watching the video, with so many people admitting they’ve been tying their laces wrong for years. Others claimed they’ve been following the correct method their whole life.

I don’t know about you but I need to reevaluate my entire life after watching this video.