According to Netflix, the last episodes will see “The Eldritch Terrors descend upon Greendale”, adding: “The coven must fight each terrifying threat one-by-one (The Weird, The Returned, The Darkness to name a few), all leading up to… The Void, which is the End of All Things.

“As the witches wage war, with the help of The Fright Club, Nick begins to slowly earn his way back into Sabrina’s heart, but will it be too late?”

In today’s bad news: The Chilling Adventures of Sabrina has been cancelled by Netflix.

Whilst Kiernan Shipka fans are less than impressed, they’ll still be treated to a final eight episodes – aka ‘part four’ – later this year. 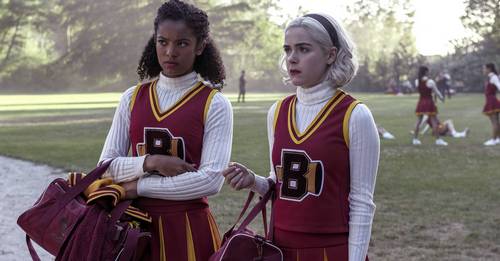 It all comes down to one last Chilling Adventure. Our final chapter is coming later this year. Coven forever. ? pic.twitter.com/T0jkwAc1wJ

Discussing the popular show’s cancellation, showrunner Roberto Aguirre-Sacasa said: “Working on Chilling Adventures of Sabrina has been an incredible honour from day one.

“The cast, beginning with Kiernan as everyone’s favorite teen witch, has been an absolute joy. I am beyond thankful to the crew, writers, editors, assistants, and everyone for pouring so much love into this dark dream of a show.

“I’m also grateful to our partners at Netflix, Warner Bros., Berlanti Television and Archie Comics for letting us tell the story we wanted to tell, the way we wanted to tell it. We can’t wait for everyone to see part four.”

Why?! Why only one more season?! Dammit @netflix you keep killing all of my favorite shows after S3!

Could 2020 get any worse? Chilling Adventures of Sabrina got cancelled ?

The show aired in December 2017 as a modern day incarnation of Sabrina: The Teenage Witch[/link] – 22 years since the show first hit TV screens. It was given a reboot by the makers of Riverdale and was a darker spin on its original.

Kiernan Shipka played Sabrina Spellman in the reboot. Previously known for being the child star of Mad Men, the show’s creator, Roberto Aguirre-Sacasa, was full of praise for the leading lady when the casting announcement was made.

He said: “We’re all such huge fans of Kiernan’s work that when we started talking about who this new incarnation of Sabrina could be, her name was on everyone’s wish list. This is a darker, more macabre version of Sabrina, and we’re incredibly excited for people to see Kiernan make this iconic character her own.”

It’s a sad day for Sabrina stans but here are all the other brilliant shows you can watch on Netflix RN.

These are all the exemptions to the ‘rule of 6’

Documentary about the Watts family murders