Forging and maintaining our own authentic allyship is a highly individual process, and we’ve only just begun to scratch the surface of the true work that needs to be done.

But as a starting point, below are some initial ways we can keep the momentum going and follow through on our support. We will update this page as and when new Black Lives Matter events are announced.

Since the tragic murder of George Floyd on 25th May, cities across the world have become loud with the anger, grief and resolve of their protestors. Many white people are asking themselves how we can be true allies, educating ourselves on the ingrained, insidious structure of systemic racism and confronting white supremacy and our own privilege.

But for the Black community, this fight is nothing new and it is not something that can be opted out of or cast aside. The sad truth is that whether it be next week or next month, some white people and corporations will lose interest in the Black Lives Matter movement as the next viral story governs the news cycle. The performative allyship and self-serving social media posts will fade away and anti-racist agendas will be forgotten as easily as they were begun. 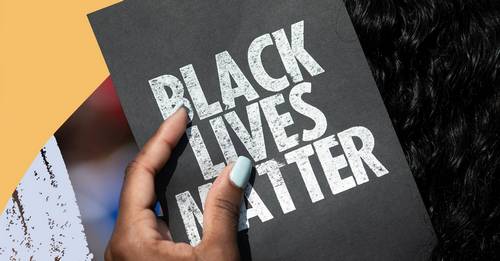 Don’t be one of them. Yes, we will mess up along the way and the path will be slow and laden with guilt – but it’s a path we must stay on.

Public protests are crucial in shining a light on socially and economically marginalised groups and creating a community of strength and solidarity. History has also shown them to be an effective tool in furthering civil rights campaigns, putting pressure on the state and influencing politics – for example, in 2011, 18 days of protests in Egypt against president Hosni Mubarak forced his resignation.

To find out about protests or events happening near you, try searching ‘BLM YOUR AREA’ or ‘Black Lives Matter YOUR AREA’ on Twitter.
In London, there are the upcoming protests we are currently aware of (for the latest updates, follow @ldnblm on Twitter):

Of course, the decision to protest during the Coroanvirus pandemic isn’t an easy one but should you wish to go ahead, make sure you read our guide on how to do so safely:

Keep a check-list of educational resources

Get informed, and stay informed. Don’t ask your Black friends, colleagues or people of colour you follow on social media to spend their time helping you learn about race and racism.

It’s not their job. Instead, spend your own time making a list of educational resources, constantly research and update it, and work your way through them. We’ve put the below together to help you get started. Let’s make sure we never stop reading, listening and learning.

Several petitions have been gaining traction in the last few weeks and hopefully you’ve signed as many as you can. The next step is to follow up and check how they’re progressing. The change.org website suggests other ways you can help, from making a donation to sharing the petition for others to sign on social media.

Don’t rely on others to tell you which petitions to sign; check change.org as often as you can for other petitions demanding racial justice – make it part of your daily routine. Plus, here is a list of petitions that still haven’t met their goal which is being constantly updated.

Chase your MP and keep the pressure on

You’ve already emailed your MP? Don’t stop there, keep the pressure up – change doesn’t happen without pressure. Keep holding your political representatives to account, let them know that you will keep campaigning for racial equality and demanding that they use their position of power to incite justice and change, and that as their constituent you can and will vote them out based on the action they take next.

Don’t forget to use TheyWorkForYou.com to find a record of how your MP has voted in parliament to see if they represent you.

You may have made one-off donations to initiatives such as George Floyd’s Memorial Fund, The Minnesota Freedom Fund, The UK Black Lives Matter Fund, Belly Mujinga’s Memorial Fund, The Movement For Black Lives, The Bail Project, The Black LGBTQIA Therapy Fund, The Stephen Lawrence Charitable Trust, The Racial Injustice Network and so on, but setting up a smaller monthly payment is a great way to take your support and commitment further.

When it comes to organisations and groups, don’t just throw money at them; connect with them. Find ways to engage, support and get involved in their activism longterm.

Confront your own unconscious bias

Perhaps the most challenging but vital work lies in acknowledging, uncovering and unlearning our own implicit biases. We probably like to think we aren’t biased towards others, but the really tough-to-swallow truth is that we all have learned, unconscious attitudes instilled in us by our environment, media consumption and the institutions in which we were brought up, that may affect how we treat the Black community.

Put simply, we have been raised in a structurally racist society which will have shaped our judgements in one way or another. This can, for example, take the form of microaggressions; those seemingly innocuous comments or behaviours that perpetuate longstanding stereotypes and a sense of ‘otherness’.

Unlearning white supremacy, and doing so without explaining or defending ourselves, is a deeply personal and incredibly difficult thing. It will make you feel sad, lonely and overwhelmingly guilty. But we must do it anyway. Remember, it is a privilege to learn about racism instead of experiencing it your whole life.

Use it to initiate uncomfortable conversations

Talk to your friends, family and colleagues about those unconscious biases. Acknowledge your own faults, discuss them openly and invite them to do the same. Let’s normalise admitting when we’re wrong. Opening up this dialogue and challenging others – whether it’s openly racist family members or friends who insist they have no implicit prejudices – will be uncomfortable and demanding. Now imagine living with that your whole life. Don’t back down.

Keep posting on social media – but do so wisely

Social media is one of the most effective ways to show your ongoing support and continue to raise awareness of the anti-racist movement. But we have to ensure we’re using our platform to amplify Black people’s voices and share any resources we found particularly informative or useful, rather than centring the narrative around ourselves. This is not a time to talk about our own personal experiences or how we’re feeling, even if emotions of outrage and shame stem from a place of empathy. This isn’t about you. Ditch your ego.

Remember not to use the #BlackLivesMatter hashtag for simple declarations of support as this makes it more difficult to access vital information.

It may sound superficial, but a dedication to supporting Black-owned business – particularly when so many areas of retail are dominated by white men – is an important step in anti-racism. After all, it’s shoppers who hold the ultimate power to raise a brand’s popularity or shut another’s down. We’ve put together the below Black-owned brands across beauty and fashion but they are by no means definitive.

Again, social media is one of the best ways to discover new brands and small businesses to support – search the hashtags #supportblackbusiness, #blackowned, #blackcreatives and #supportblackart to name just a few.

FreeBritney campaign continues to unfold, we ask – why now