In fact, eBay has revealed that just 10 days after when the show first aired, there was a 273% surge in searches for ‘chess sets’ on their UK site.

With a strong female lead in the form of Anya Taylor Joy, The Queen’s Gambit centers around the life of orphan and chess prodigy Beth, from her childhood days learning the game in an orphanage basement to playing Grand Masters in Paris and Russia. If we’re being honest, our initial interest in the show was sparked by the amazing sixties outfits worn by Beth, not to mention discovering that Sam, the adorable boy from Love Actually, plays a significant role in the show.

But after only a few episodes, we’re not the only ones imagining that the Sicilian would definitely be our signature opening move too (if only we could remember which one is the pawn again.)

Isn’t it strange to think of all the hobbies we’ve taken up in 2020, when most of them we would’ve laughed off in pre-Covid times? Instead of nights at the pub and holidays abroad, thanks to Corona, our free time is now spent rather differently. It isn’t necessarily a bad thing however – think of all the new skills we’ve managed to hone in less than 12 months. 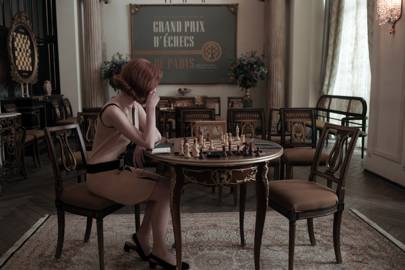 From learning to sew to crafting Christmas cards and macrame, not to mention the non-stop baking that has seriously upped our domestic goddess game. But as surprising as these newfound pursuits are, the UK’s newest craze is perhaps the most unexpected – the game of chess.

Thanks to the highly popular Netflix show, The Queen’s Gambit, our interest in the classic board game has reached unprecedented levels. Check. Mate.

So why has the nation been so captivated (eBay UK reports searches once every six seconds for ‘chess’ on their site since the show aired) by a game previously thought of by most of us as boring, impossibly hard to comprehend or nerdy?

Nouman Qureshi, Toys Category Manager at eBay UK, said: “Inspired by the films and TV shows that the nation is watching whilst at home, we’re seeing shoppers turn to more traditional forms of entertainment during this second lockdown.”

And it doesn’t get more traditional than chess although, we’re slightly embarrassed to admit it’s taken a TV show for us to start learning the fundamentals of the game (and that ‘horse’ isn’t an acceptable term for the knight.)

The 9 Most Shopped Styles, On Social Media

Cycling has surged in popularity since lockdown began