Use gluten-free soy sauce for gluten-free version. If you are using tamari instead of soy sauce, use half as much, as tamari is more concentrated than soy sauce. 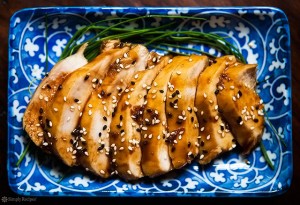 1 Gently simmer chicken in sauce made with sake, mirin, soy sauce, sugar, ginger: Mix the grated ginger, sugar, soy sauce, sake and mirin in a pot and bring to a boil. Add the chicken breasts, return to a simmer, then lower the heat to the lowest possible setting (warm if you can), on your smallest burner, and cover.

The idea is to cook the chicken as gently as possible, below a simmer. Cook for 20 minutes.

If you are working with somewhat large chicken breasts, you may need to cook them longer, or cut them in half before cooking.

2 Toast sesame seeds: While the chicken is poaching, toast the sesame seeds in a dry pan until they begin to brown. Move to a small bowl and set aside.

3 Set aside chicken, cover with foil: Remove the chicken breasts from the teriyaki sauce, set on a plate and wrap with foil.

4 Reduce sauce: Bring the sauce back to a boil and boil vigorously until the sauce is reduced to a syrup, about 8-10 minutes. Keep an eye on the sauce, stirring it occasionally. 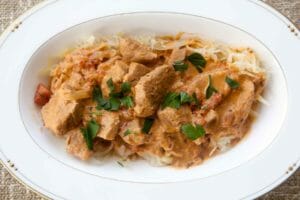