Deja is no stranger to the podium, having won the 100- and 200-meter sprints at both the 2016 Paralympic Games and the 2017 World Championships. The 23-year-old also took home 100-meter gold and 200-meter silver at the championships in 2015 (note: track and field events are split up by classifications based on athletes’ impairments).

Deja was born with brachial plexus, or shoulder dystocia, which caused limited mobility and nerve damage in her right shoulder.

On Nov. 13, US Paralympic athlete Deja Young ran to victory in the 200-meter T47 event at the 2019 World Para Athletics Championships in Dubai. She also finished second in the 100-meter T47 behind fellow American Brittni Mason, after setting a world record of 11.92 seconds in the prelims (Brittni beat that record in the finals).

Deja’s accomplishments on the world stage have come despite a series of hardships off the track. In 2016, before the Paralympics in Rio, she attempted suicide. She told The National that she spiraled due to pressure to perform well. She also was falling behind in school. “I didn’t talk to anyone and finally I broke, had a suicide attempt, and ended up in hospital. It was literally two months before the games and I had a decision to make to see whether I was strong enough to make it.” Deja persevered and went on to win two gold medals. Asking for help, she said, was the first step to recovery.

That perseverance was tested again when she got into a serious car accident the following year. “I felt like, here we go again,” Deja told teamusa.org. “I had to start at square one, and I felt defeated. I felt like there was no end.. .. I had a decision again, to see if I wanted to sulk and not run, or come back.” Just like she did at Rio, she pulled through and won two golds at the 2017 World Championships. 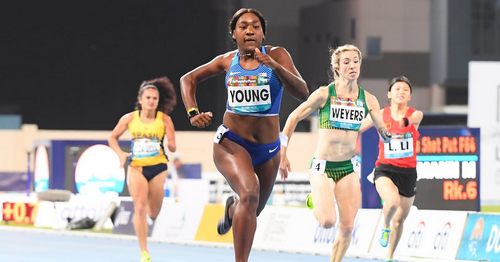 Three years after her suicide attempt, Deja said she still struggles with her mental health but that athletics helps, even though that’s where a lot of the pressure comes from. “I’m still struggling. I’m very anxious, very nervous, but it’s OK because the mind is so powerful,” she told The National.

Deja, who majored in social work at Wichita State University, where she was on a full track scholarship, told teamusa.org that she wants to make a difference by sharing her story. The 2020 Paralympics in Tokyo are her goal, but more importantly, “if I can make an impact, save a life with my story of suicide. .. that will make me happy.” Ahead, check out photos from the championships, the moment she clinched gold, as well as some of her past winning performances. We’re with you, Deja, and we can’t wait to see what’s in store for you next!

Schools Ending the Academic Year Early Because It Teaches “When It’s Hard, Give Up”