So first off, what is the tea bomb trend that’s sweeping social media? Tea bombs are not unlike hot chocolate bombs – the hollow balls of chocolate that we obsessed over any time they burst open on contact with hot milk.
Those tea bomb videos everyone keeps posting on TikTok? We. can’t. stop. watching.

It’s a welcome pattern interrupt for our daily doomscrolling, helping us to shake off some of the gloom of January, and it’s exactly the kind of rainbow content our own grids could do with, too.

Bring us *all* the likes. 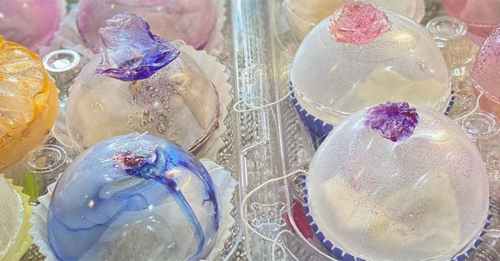 This, however, is our time, tea-drinkers.

Tea bombs have been described as mysterious ‘crystal balls’ – always translucent and often glittery – that melt in hot water to release dried tea leaves (or herbal tea bags) and flowers inside the cup.

Unlike chocolate bombs, which made us feel all warm and fuzzy in autumn, colourful tea bombs make us look ahead to spring and they’re all kinds of mesmerising.

On TikTok, the hashtags #hotteabombs and #teabombs have had almost 5million combined views. Sure, views of the hot chocolate bomb trend reached dizzy heights of more than 119.4 million but tea bombs are just getting started.

Now we just need to know how to jump on this hype (thankfully, it’s way easier than it looks).

Without further ado, here’s how to make your very own hot tea bomb…

For one tea bomb, you will need…

The biggest cultural triumphs and disasters of 2020

I became a vegan after the Coronavirus outbreak